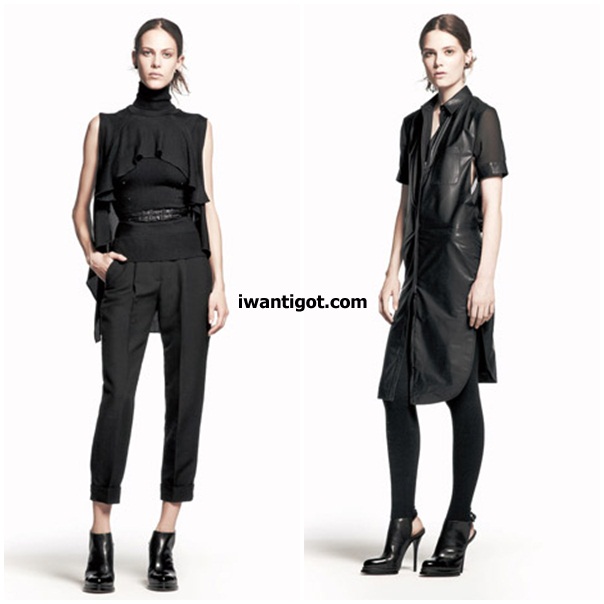 Normally, I would be an Alexander Wang fan but I’m not liking Pre-Fall 2011. I was only interested in these two looks. Even the shoes look a little meh to me. Spring 2011 wasn’t on my radar either but I tend to change my mind when I see things in the store. However the denim is not that I ‘m interested in at all. Accessories maybe? I’m curious to see what fall winter 2011 – 2012 will bring. Hopefully something more compelling.

I was browsing the Jonathan+Olivia site (they have online shopping too) when I noticed that one of this season’s Alexander Wang handbag style name is called Anita. The Anita Frame Satchel by Alexander Wang isn’t the Diego bucket bag but it’s still pretty nice. The inner narcissist in me really wants to buy this bag. 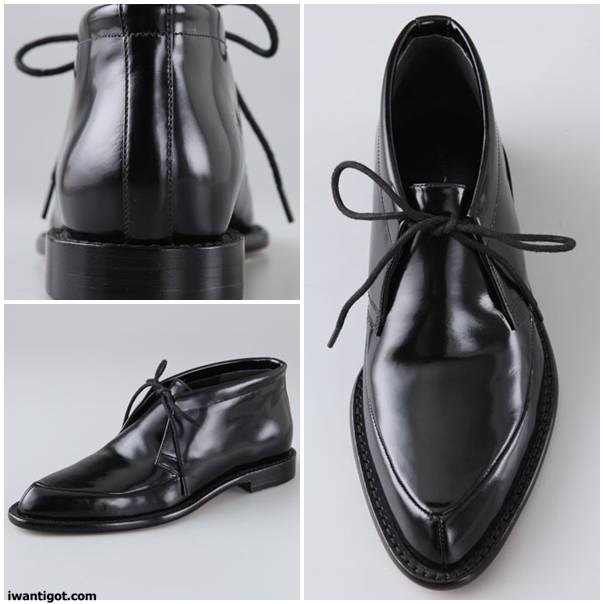 Alexander Wang flat shoes are just as compelling as his heels. 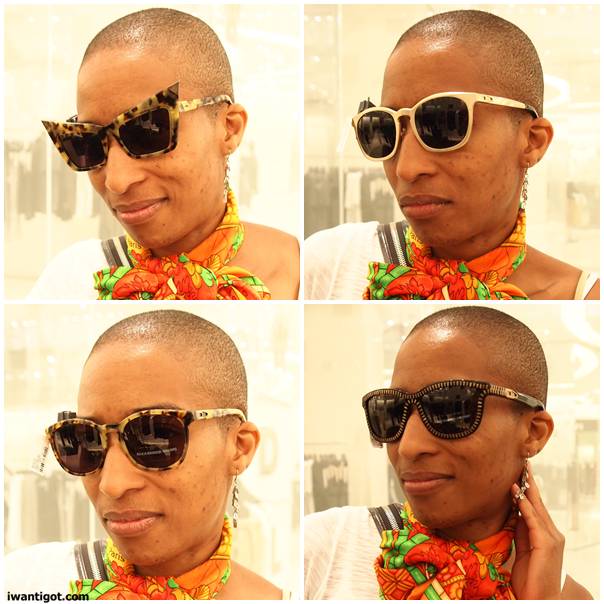 The cat eye sunglasses will always be my favourite out of the Alexander Wang Sunglasses collection. They are so much fun.Â  I was playing around during his visit to Holt Renfew and played a little dress up. 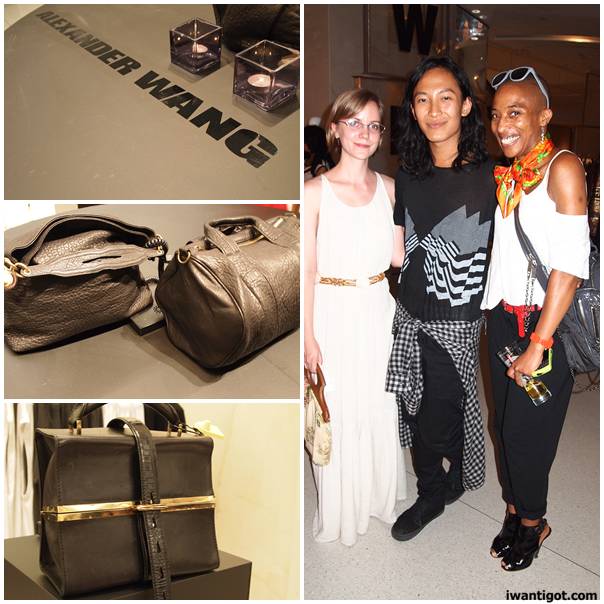 Alexander Wang visited his fans in Toronto last week at Holt Renfrew. There was a public personal appearance in the afternoon and a private party in the evening. I was at work during the day so I went to the party. 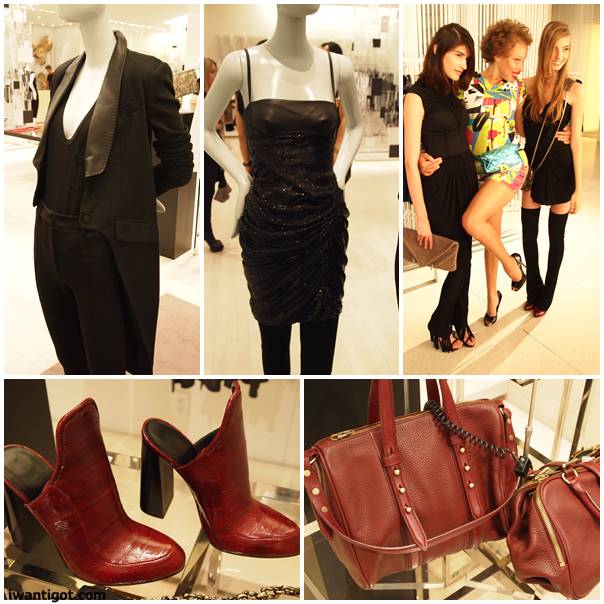 I wasn’t too star struck by Alexander and I managed to get a quick hello and photo with him. He’s just one of those beautiful people. The man has a flawless complexion. He was also very good at working the crowd and talking to everyone. 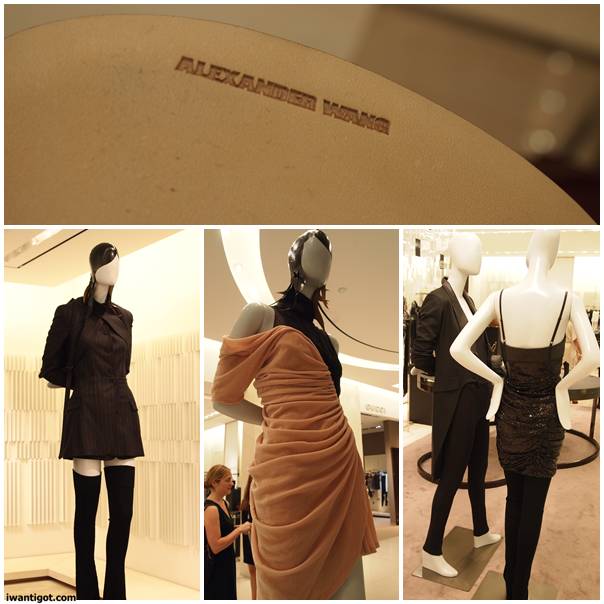 Holt Renfrew setup the 2nd floor with a ton of Alexander Wang merchandise and samples of the Fall 2010 collection. I’m a lover of the Wang accessory. The shoes and bags are always a hit. I wasn’t all that jazzed about this Fall 2010 Ready to Wear collection back in February but after seeing some of the pieces that Holt Renfrew is picking up in person, I have to say I’m a fan. Great pants and blazers are everywhere.Â  It seems to be a trend, I didn’t care much for Spring Summer 2010 until I saw it in person too.

You can see a slideshow of hi quality images from the Alexander Wang event in Toronto event after the jump.

END_OF_DOCUMENT_TOKEN_TO_BE_REPLACED 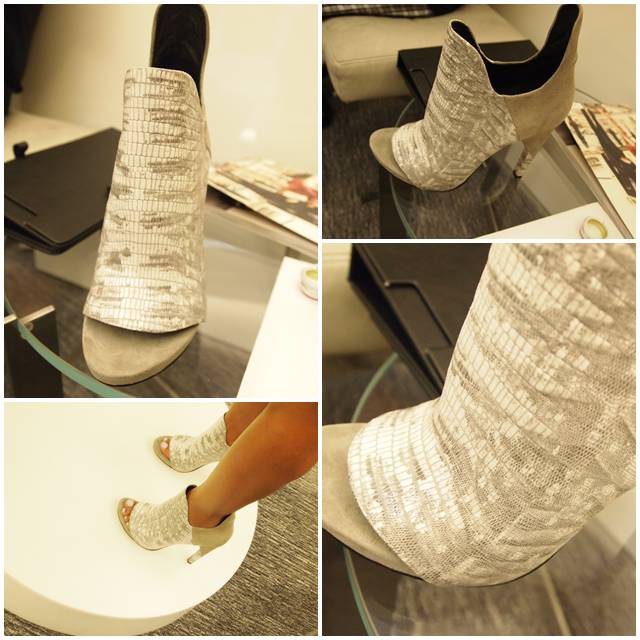 These Devon Open Toe Booties by Alexander Wang are fun. Playing with Alexander Wang shoes was a little detour I made while in the mist of playing with Todd Lynn in the personal shopping area of Holt Renfrew. I love the colour and reptile treatment to the leather. I’m not usually a suede fan but I like the contrast it provides. They are pretty comfortable with a reasonable heel height.

The shoes are available at Holt Renfrew Bloor street and online at shopbop.com and net-a-porter.com. 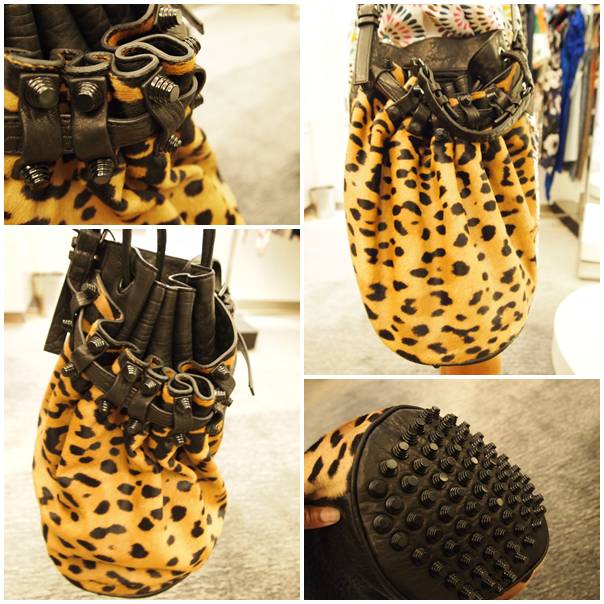 The Diego Suede Studded Bucket Bag by Alexander Wang is my ultimate Spring Summer 2010 Bucket Bag. I was playing with it at Holt Renfrew and fell in lust with this bag. The hardware is beautiful and it’s pretty heavy and solid.Â  I appreciate the masculine qualities ofÂ  Alexander Wang handbags.Â  My aversion to animal print is slowly being broken down.Â  I love that there is a short and long strap for the bag.

You can purchase this bag at Holt Renfrew or online at shopbop.com. 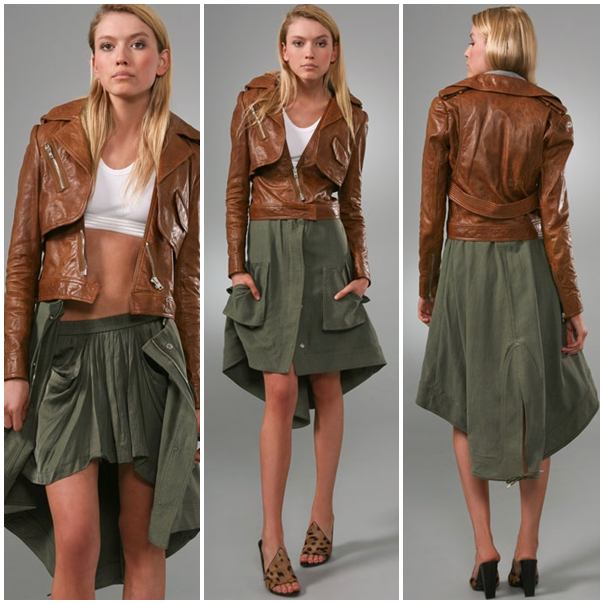 I saw this Alexander Wang Leather Jacket with Removable Canvas Skirt in Holt Renfrew earlier this week. I was all over it. It came in some different colour combinations too. This piece did nothing for me on the runway but in person it’s spectacular.

You can buy online at shopbop.com, net-a-porter.com

The other type of handbag I’ve been obsessing over is the bucket bag. I have no idea why they are calling to me at this moment. 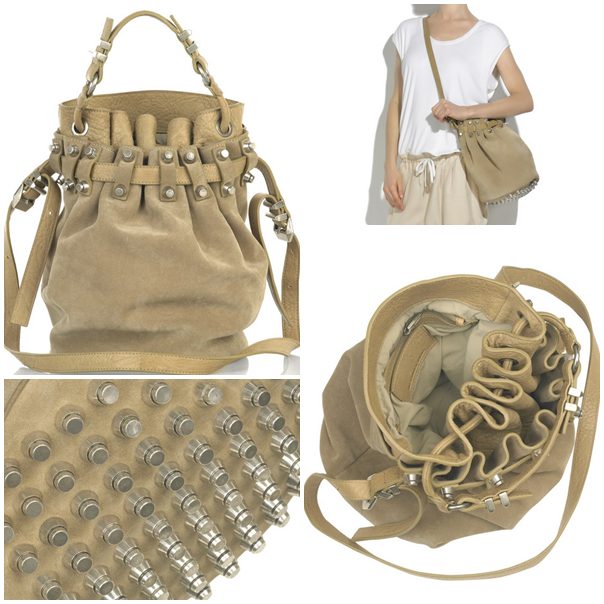 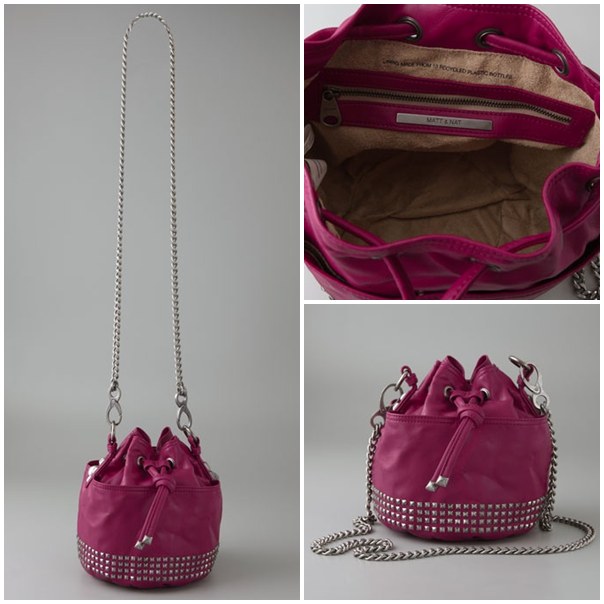 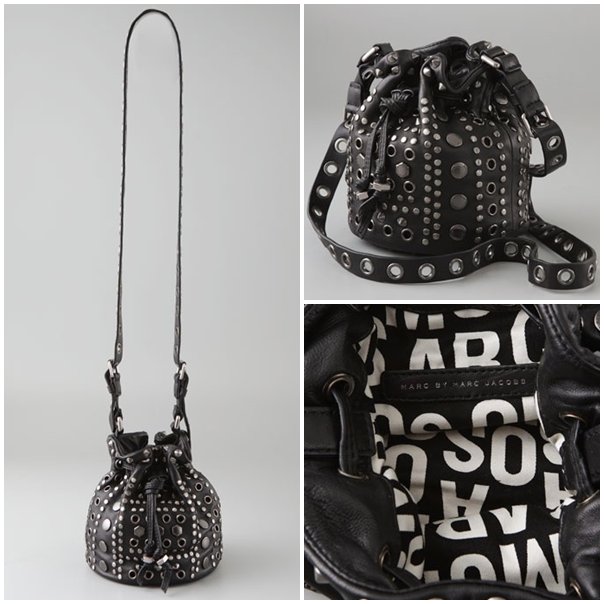 These are a few of the more interesting ones I’ve seen.

UPDATE(May 4, 2010): I saw the black version of the MATT & NAT bucket bag for sale at Over the Rainbow. It’s pretty fun in person. I like it.

UPDATE(May 10, 2010): I saw the Marc By Marc Jacobs bucket bag at Holt Renfrew on the weekend. It’s pretty nice in person also.

I was coming home on the subway after Canada beat the US for gold and I ran into a friend Arieh Singer. He had obviously been partying during the day and was taking drunken photographs of his wife and her sister on the subway. He asked me if I wanted to take part and of course I said yes. Here is the result of that fooling around. 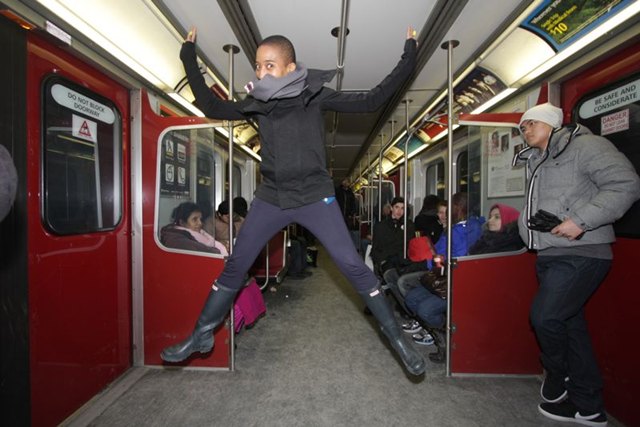 I’m in love with this picture, but I happen to love photos where I’m jumping for some reason. 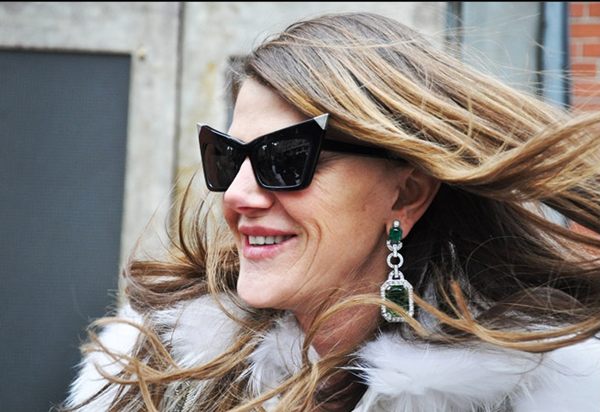 This photo by Tommy Ton made me change my mind about the Alexander Wang cat eye sunglasses. They looks so fun. 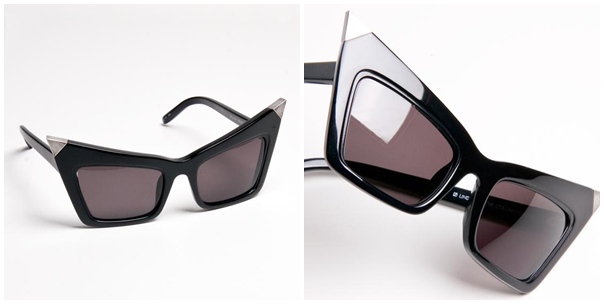 Alexander Wang created these sunglasses in collaboration with Linda Farrow. Linda has done other collaborations with Raf Simons, Dries Van Noten and The Row to name a few.

UPDATE (April 11, 2010): You can grab a pair of these sunglasses at Holt Renfrew Bloor Street 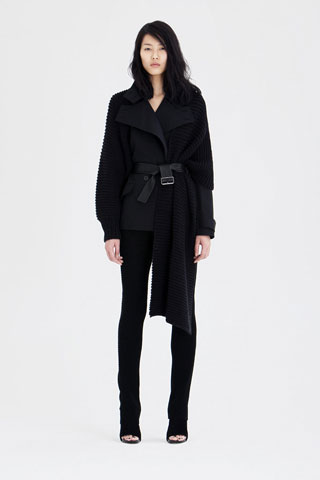 Alexander Wang Pre-Fall 2010 moves away from the casual sportswear to something more minimal. I like it. 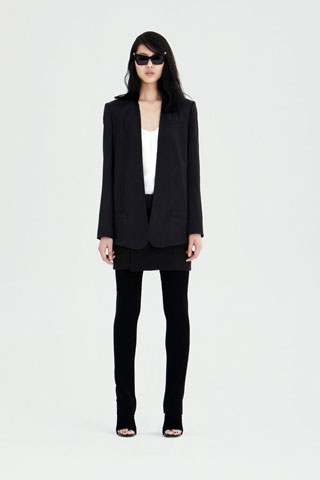 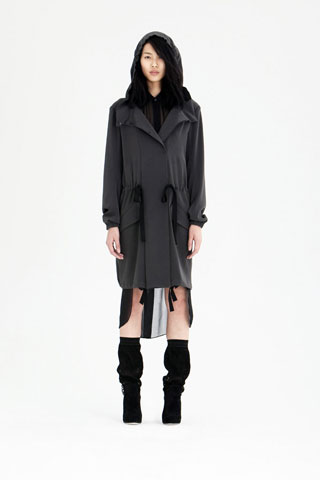 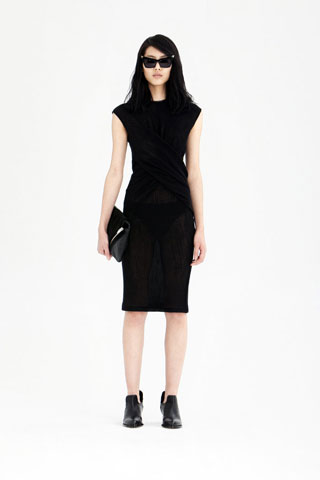 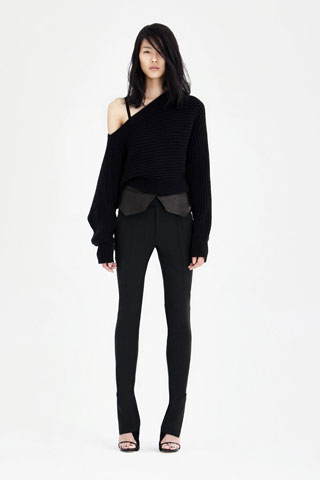 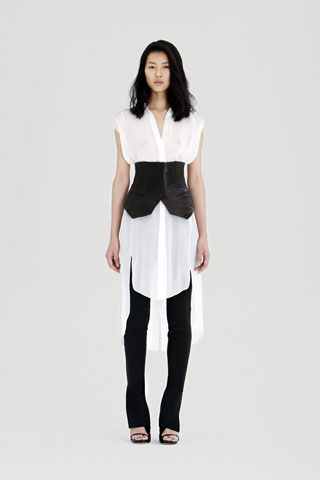 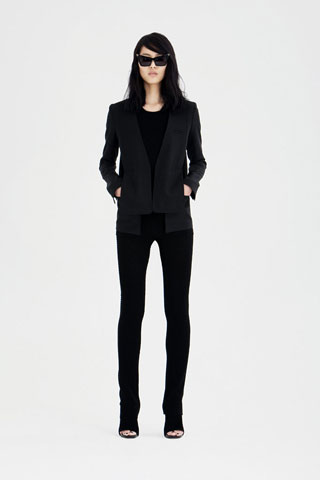 Sometimes readers ask me questions. If they are of value to all my readers I post them online. If you have a question, please feel free to submit it using the contact form. I’ll definitely do my best to answer it.

I want – I got reader Angela wrote:

where can i buy alexander wang ‘s collection in Toronto other than Holt ??

You can find Alexander Wang at Jonathan + Olivia and TNT.

UPDATE:(April 23, 2010) Alexander Wang shoes are available at Holt Renfrew only.

I can’t seem to get my mind off them though. I know they are all wrong, but they won’t stop haunting me. 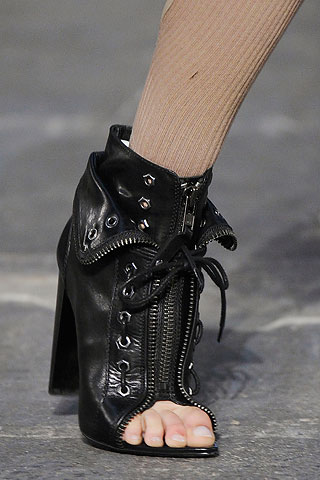 I wasn’t a fan of the Alexander Wang Spring 2010 Ready-to-Wear Collection in general but there were some great individual pieces. The rest was a trainwreck.

I’m a really big fan of the Alexander Wang Expandable Shoulder Bag. I even loved the denim version. This picture is from the Holt Renfrew Fall 2009 â€“ 2010 Womenswear Media Preview, where I got to see and touch the bag.

You can purchase Alexander Wang handbags at Holt Renfrew and Reborn

There is nothing I love more than getting a sneak preview of anything fashion related. I was pretty pumped for the Holt Renfrew Fall 2009 – 2010 Womenswear Media preview. What new goodies did the buyers bring back for us interested fashion folk.

Special bonus was an appearance by Joseph Altuzarra. He is being touted as the one to watch by many. His stuff is pretty hot, I have to admit. He was an intern at Marc Jacobs and freelanced for Proenza Schouler. Riccardo Tisci also recruited him to be a design assistant at Givenchy. His first collection was Spring 2008. He was absolutely adorable. How can you not love a guy whose primary muse is his Mom.

The event was held in the 3rd floor Contemporary area. Select samples from the season where on display for everyone to get a look at. Barbara Atkin, Vice President, Fashion Direction for Holt Renfrew talked about their trend research for the season and the direction for buyers. She talked about the new economy. Less, but better the new mantra. Giving the best product value for the money was a big focus this season. Another buzz word was serious consumption instead of conspicuous consumption. The are looking for that beautiful product that will become iconic, not a flash in the pan.

Trends on the Holts radar this fall are:

Check out all the photos I took in the slideshow: 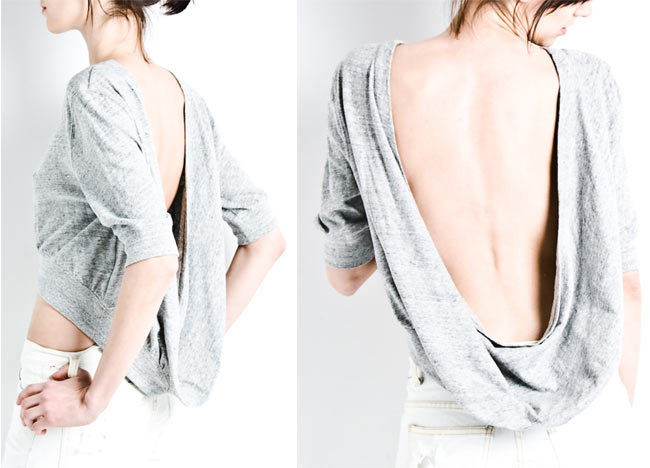 The back of this sweatshirt is just fantastic. I’m not a big fan of the crop top look but it would make a great layering piece.

One of my peeps at Saks sent me a link to this video they had made for the Alexander Wang Spring 2009 Collection at Saks.com. In this video, Alexander talks about the inspiration for the designs and a model stands there doing what she does best in said design. I find it really interesting as I love to know what the backstory to each piece is.

I’m not one to watch a lot video but I think this works for the following reasons: it’s short and the designer is talking about pieces that are available at the retailer which allows it to be more focused and relevant. It gives the consumer more information about the collection and they now know what is available in the store/online shop.

I was browsing the Alexander Wang site for a video of the Spring 2009 collection. There were pictures of the collection but no video, so I decided to browse and found the accessories. I had to check out the shoes. I saw the video in February and the shoes looked insane. (The runway music is pretty kick ass in this show)

The title of this post is pretty much link bait, but it’s actually true. These shoes are insane!!!!! 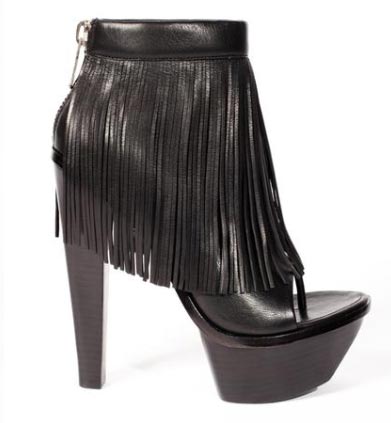 Very pretty and wearable collection, however it didn’t grab me like Fall Winter 2008.

Didn’t change my mind about the collection too much, but props for using Skinny Puppy

Everyone was peeing themselves over this collection in NYC

I didn’t do a dedicated post to this collection but I quite liked it.

I include this only because the presentation is great. I really like the side views. The clothing on the other hand….