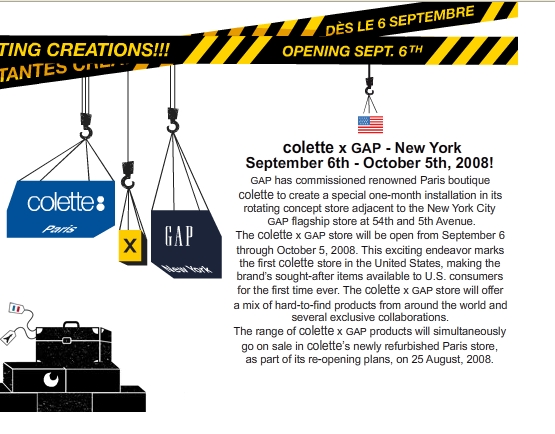 If I was only in NYC like last year to see how the Colette pop up shop in The Gap will work out. www.colettexgap.com

host a Colette pop-up shop adjacent to its Fifth Avenue flagship, from September 6 through October 5. Called Colette X Gap, the shop will look more like Colette’s Paris boutique than your typical excessively branded Gap, shilling the French brand’s signature candles, room fragrances, and art. The shop will also collaborate with Oakley on sunglasses, Le Labo on fragrances, and Asics on Tiger sneakers, for limited-edition stock to be sold exclusively in the pop-up. Colette has also commissioned artists and designers, like French graffiti artist Monsieur AndrÃ©, accessories maven Anne-Marie Herckes, Repetto, and Alexis Mabille, to revamp Gap staples like trench coats, denim jackets, and totes, also to be offered exclusively in the Colette pop-up.

The store will release new products each week, including limited-edition Gap tees by Parisian and New York artists, exclusive stationery, and other objets d’art.(Colette Pop-up to Arrive in Fall, Courtesy of the Gap — The Cut) 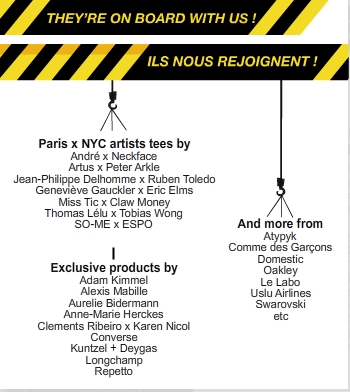 The designer collections are back this year. I picked up a Rodarte shirt last season. I’m curious about this season.
Click the images to get a look at this years collection which includes some menswear.

Article from WWD. – thanks the Fashion Spot

Gap’s iconic white shirt is getting a new life this spring.

Next month, Gap will be bringing back its Gap Design Editions limited edition program, having enlisted 3.1 Phillip Lim, Band of Outsiders, Michael Bastian, Philip Crangi and Threeasfour for the program’s second round.

The initiative, part of Gap’s partnership with the CFDA/Vogue Fashion Fund, featured Rodarte, Thakoon and Doo.Ri last year. This time, it will also incorporate men’s wear and jewelry, and widen its distribution to include Gap adult stores in Canada, the U.K. and Japan.

“We were very pleased with the launch last year,â€ said Gary Muto, president of Gap Adult. “It is centered around encouraging new American design talent and bringing it to a broader audience. There are a lot of emerging designers and it’s become a crowded field, so we said, â€˜How do we celebrate the creativity and use our size to announce the new talent?’â€

Gap, which has been challenged by store traffic and merchandise problems, is hopeful the initiative will help drive traffic back into stores.

“We have taken a classic iconic Gap item,â€ Muto said. “It is redefining a classic and hopefully, it is appealing to our customers, and customers who may not have shopped at the Gap in the past, or haven’t shopped [there] in a while. It broadens the reach.â€

This edition, Gap took more of a strategic approach. Where the 2007 initiative went to about 80 stores, there are elements this year that will go to all units in the U.S. For instance, Muto said the designs of Lim, who was a runner-up for the 2007 CFDA/Vogue Fashion Fund Award, will be more widely distributed. (CFDA/Vogue Fashion Fund winner Rogan already had an agreement with Target, which prohibited the label from participating in this collaboration.)

Each designer worked with Patrick Robinson, executive vice president of design for Gap Adult and GapBody, to put together their pieces.

Lim created four pieces, including a tie-neck shirt, a bell-sleeve ruched shirt and a layered sleeve top, all at $78.

“My goal was to bring the complexity and playfulness of a woman’s essence without compromising the perfect simplicity of a classic white shirt,â€ Lim said.

Band of Outsiders designer Scott Sternberg created a patchwork tunic for $88. “I wanted to patchwork a bunch of traditional white-on-white men’s shirting fabrics together, like a madras patchwork, but all white, bringing a sense of imperfection and an artisanal quality to the shirt,â€ Sternberg said.

Threeasfour’s Gabi, Adi and Ange designed a camisole for $78 and a cutaway dress for $88. “We were looking to find a balance of the three major elements involved: white poplin, Gap and Threeasfour,â€ Gabi said.

Adi added, “We chose to do an easy summer dress and a little asymmetric top that translate our signature seaming and vision [for] a wider audience.â€

Bastian, meanwhile, studied his own design vocabulary to come up with his designs for Gap, which include an epaulet and a Western shirt for men, both at $78. “There is a good skinny military shirt I have never weirdly done in white poplin, and I also always do a Western shirt, with that little Western detail on the shoulder and back with a pleated formal shirt fabric,â€ said Bastian, who also did a women’s style.

Crangi’s task was to create jewelry for the project, and he came up with such looks as a white or black wide resin cuff for $45. “My approach was to find out what is the most basic component of the Gap aesthetic and evolve the design from that,â€ Crangi said. “I worked with the idea of a primary palette and basic shapes.â€

The shirts will be available at Gap Adult stores from April 15. 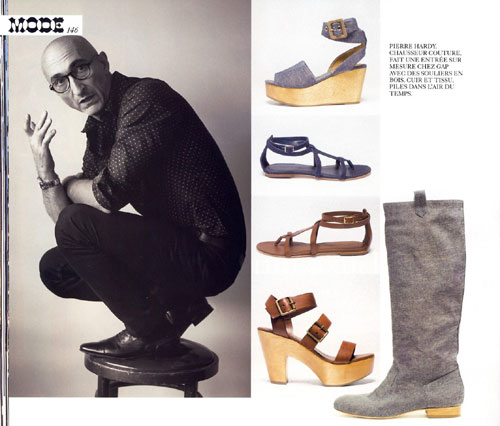 THE HARDY BOY WHY: Couture footwear at Gap prices. Need we say more? The wait is over, chicettes: As we told you in our exclusive story in FLARE’s most recent issue, Pierre Hardy’s Gap collection is finally in Canada starting Monday. The Parisian cult cobbler, who also designs for his own eponymous label, Balenciaga and Hermes, is responsible for converting countless women (including many a FLARE editor) into accessories addicts. Your feet will be perfectly prepped for spring with the four styles, which include a peep-toe wooden wedge with chambray print, a 70s style strappy platform and our favourite, a metallic gladiator sandal. Get them at the 7 locations across the country.