So it’s LG Fashion Week once again. Toronto now has its own kick at the Spring Summer 2011 collections. The venue has changed to Heritage Court at Exhibition Place. It’s a lot roomier and there are lots of bathrooms. Getting into the runway room is alway a chore and that hasn’t changed. I love the exposed brick but I wish it was on both sides of the building. The non brick side could have used some extended curtains but I’m getting a little nitpicky here. Overall, decent except for the bad sun glare at the end of the night. Monday night saw Holt Renfrew bring its traditional media cocktail party to the runway. We sawÂ some of the best of Canadian fashion in one runway show. Denis Gagnon, Jeremy Laing, Lida Baday, Line RUNWAY, Mikhael Kale, Pink Tartan, Smythe, Wayne Clark and Wings + Horns all presented several looks from their spring summer 2011 collections. This show was also a sneak peek at the upcoming Pink Tartan and Line Knitwear shows. The runway show didn’t have champers and nibbies,Â so it was a bit bittersweet. I stopped attending when they moved to the breakfast format started, work was beckoning at that time. Coco Rocha even attending wearing Spring Summer 2011 Greta Constantine and looking wonderful. She also gave a little speech at the beginning. I loved Jeremy Laing. His clothing is just so effortlessly cool on everyone I see. Now I’m even more excited to see the stuff in the studio. I knew I would see the entire collection from Pink Tartan and Line Knitwear the next day so I didn’t read anything into the looks shown. I would make judgments on the whole show. I liked what I did see though. I’m pretty bang on with my CBC Radio One trend predictions of colour blocking and stripes. Pink Tartan knocked that prediction out of the park. I was glad it wasn’t the real Line Knitwear show because all I could focus on was the models and the shoes. It wasn’t pretty even though the knits and printed silks were. I’m usually the biggest Mikhael Kale fangirl and it really pains me to say that I only liked the finale dress and the tan cropped leather jacket. The dress was so sparkly and beautiful. It memorized me as it shimmered under the lights down the runway. There is little left to the imagination because of the plastic which makes it a bit scandalous. 🙂 Lida Biday and Wings + Horns were both well made lines but didn’t grab me at all. I was gaga for Denis Gagnon again. I cannot wait for his show on Friday. Cannot freaking wait! He’s continuing the string thing which I love and doing something very cool things with stripes. It was my first Wayne Clark runway experience and he opened with Rose. I love Rose she’s cool. He did a series of long red gowns with bows, ruffles and roses.

So, my LG Fashion Week posts are sponsoredÂ this week. This doesn’t affect my editorial point of view and I get awesome pit pictures out of the deal (ya and money). Bloggers can also use these photos for free on their sites. Follow the Chick Advisor Flickr Feed to see the latest shows. Next up for me is Pink Tartan, Jessica Jensen + Alexander Berardi and Line Knitwear. Specialty items from fashion to home to collectibles have been created by several Canadian fashion designers and artisans — encompassing everything from organic T-shirts to artisanal maple syrup cubes to women’s recycled fur accessories. My favourite coats are a toss up between Comrags and Smythe. It wasn’t just womenswear designers, Krane and Klaxon Howl created something for the guys. The new collection at the Hudson’s Bay Company Shop included custom made canoes, canoe paddles, Pink Tartan Hudson’s Bay Point cardigans, $75 pure maple sugar cube (I was astonished at this item to be honest. I even had to twitpic it.), specially made tshirts from Shared, chocolates, chunky sweaters, Virgina Johnson printed scarfs, Point blankets, fur hats and stoles. I always enjoy the Holt Renfrew Media Cocktail and I think they might have put the best one on yet. The 3rd floor Contemporary space was more open. No more talking through the racks of clothing. The runway was nice and high so everyone could get good pictures. Random celebrities showed up too. I was so angry that I missed Sam Neill in the flesh. I’ve been in love with that man since Jurassic Park. I was too busy running around talking to people and getting my picture taken. The Jeremy Laing dress I was wearing caused quiet the stir. Even Lisa Tant said she liked it. It was the first time she’s talked to me. I think of it as a personal fashion milestone. Yes, I am quite silly. Denis Gagnon and his stylist did some DIY madness on Aldo shoes. They are so covetable. I’ve heard the rest of Denis’ collection is to die for. I need to find pictures stat. If you know of good ones, please leave a comment. I’d love to step into Mikhael Kale’s brain. He comes up with some crazy stuff. He’s very inventive with the fabrication. Loved the bright blue and pink shoes. This is one of my favourite dresses from the Jeremy Laing Spring 2010 collection. I love how the print converges to a point on the hip. Jeremy is so damn adorable. I knew I would see him at the cocktail and that’s why I decided to make sure I was representing him by wearing one of his dresses. I couldn’t believe that many people couldn’t figure out who I was wearing. I guess I’m just a little obsessed. I have scanner so I can scan now. WEEEEEEEEEEEEEEE! I talked about the great spread in Fashion mag in Feb and now I present my favourite images. 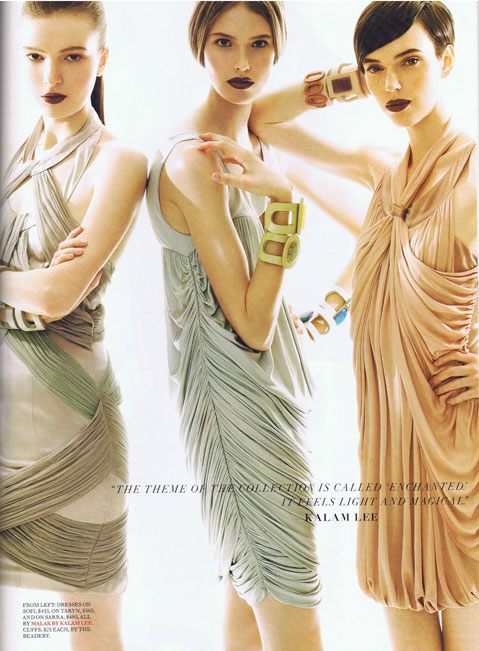 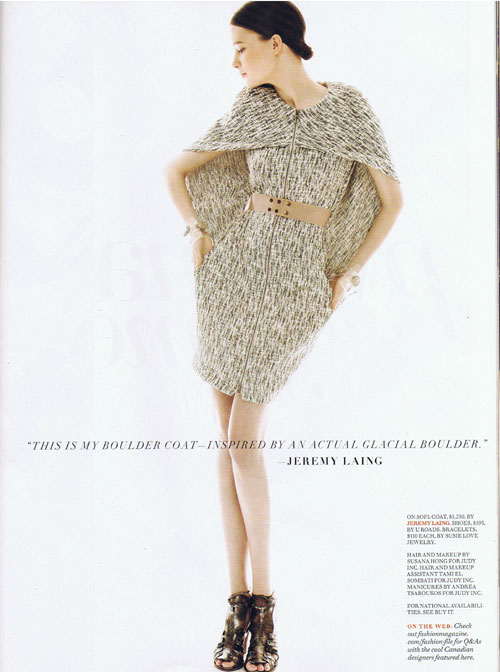 I’m in love with this dress by Jeremy Laing 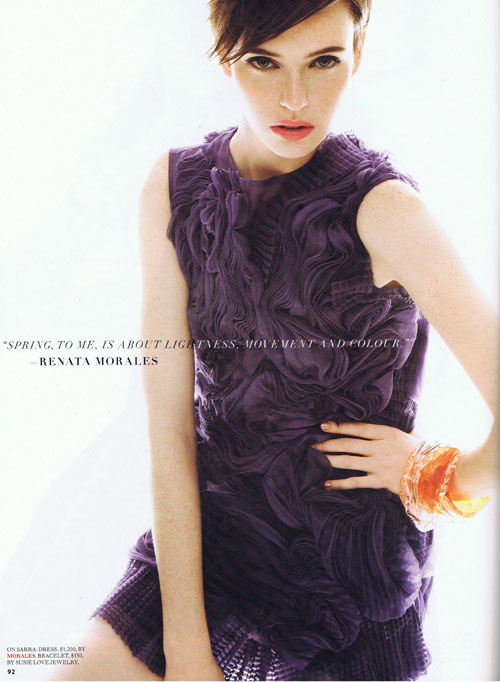 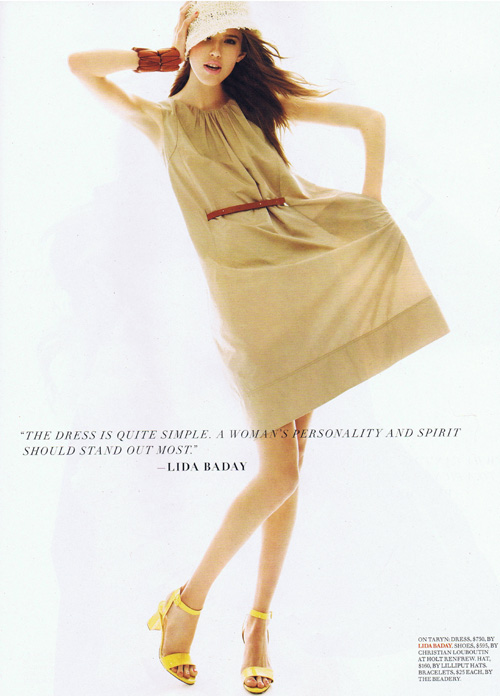 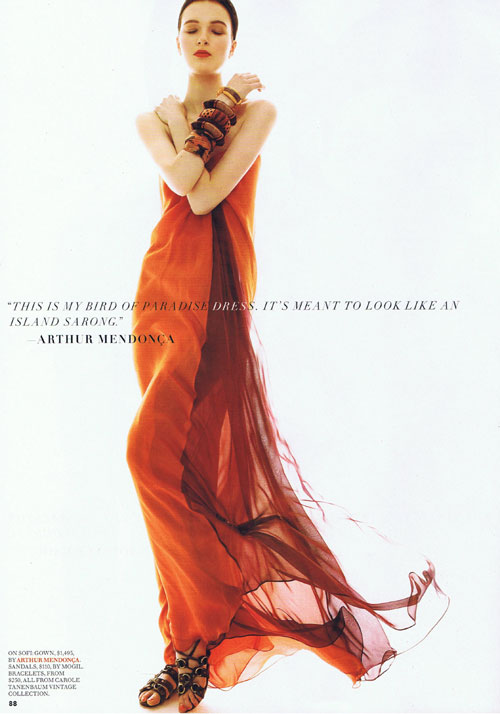 images: me and my scanner.