There is no way I’m going to like anything at this Miss Sixty/Killah spring summer 2011 preview, I thought to myself. My Miss Sixty loving days were over and I guess I considered myself too grownup to like the youthfulness of the brand anymore. I was wrong on a couple things. I realized that Miss Sixty has grown up a little bit. The clothing wasn’t as outrageous as it used to be and there were a lot of wearable pieces. Miss Sixty’s spring summer 2011 collection was influenced by the 80s (of course), the 50s, orchids and colour.Â  I was amazed it was only obnoxious in small amounts. Top picks for me is the vibrant pink leather motorcycle style jacket and the bright, neon like denim. These two items are super obnoxious, especially the denim. Amazing that the collection has gotten a bit more mature but it’s the few crazy pieces that attract my magpie eyes. Killah looked to tribal prints, irony, neon and racing as influences for spring summer 2011. This collection was very youthful and featured some of the crazy stuff I expected Miss Sixty to have. The crazy cat lady clothing appealed to me. It’s just so absurd and hilarious.Â  The cat has hair rollers, ha Killah had fluro, tribal print and lace all over their shoes this season. See the rest of my photos from the preview.

There is a Miss Sixty/Energie store in Yorkdale Mall.

Here is another picture of Sasha P killing it at Miss Sixty.

I love this picture of Sasha at Miss Sixty.Â  She totally delivering the rock and roll hardass chick look that Miss Sixty is attempting in their Fall 2009 – 2010 collection 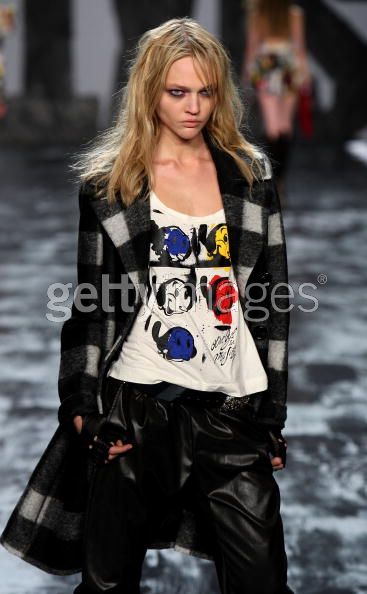