Lucian Matis fashion shows are just an absolute delight. Lucian gave us prints, transparency and leather for the spring summer 2013 Lucian Matis collection. The prints are lust worthy. The images chosen for the prints added depth to garments and made use of seams to create direction and structure with the print on the manipulated fabric.

“I named this collection MOSAIC as it is inspired by the mosaics of Morocco in contrast with the transparency and neutrality of the papyrus,” says designer Lucian Matis of his latest collection, “I was always taken and inspired by the beauty of the Moroccan art and it’s ornate elements. Spring/Summer 2013 seemed to be the perfect timing for this inspiration.” Present throughout the collection were a mix of custom pattern designed fine cottons, silks, leather, and crocodile embossed leather (Source: Press Release)

It was slowly becoming apparent that two trends were going to dominate fashion week: the Peplum and the Midriff. I love the peplum and hope it turns into a trend that sticks around. The Midriff I could do without. I didn’t like it in the 90s and I don’t really like it now. I have a weird feeling about the midriff when it’s part of a 50s silhouette.

This is the most accessible Lucian Matis collections I’ve seen. Lucian is know for impeccable work and crazy dresses but they haven’t been the most accessible to the average consumer. I watched this show and saw something that many women could wear in their daily lives. Okay, maybe not the transparency and the leather. Yes, the finale crocodile embossed leather looks. Wow. Wow. Wow.

You can see the rest of the looks from the Lucian Matis Spring Summer 2013 show at World Master Card Fashion Week after the jump.

END_OF_DOCUMENT_TOKEN_TO_BE_REPLACED

“This collection isn’t about fads or colour trends, it’s about a girl and her multi-faceted personalities.â€ says Biddell, “her style is bipolar of sorts, she doesn’t care what other people are wearing, nor does she care if you approve of what she is wearing.â€(Source:Press Release)

The show began with a short film created by Evan and Atomic Clock Cinematic Arts Inc. I’m not a big fan of screening a short film before a show. It’s usually hard to see and people can only pay attention for so long when they can’t see. Thankfully the USB press kit included the video and I watched it in the comforts of my home. It’s one of those tweaked classical music backed, slow mo camera, voluminous and flowing fabrics with a wind machine shorts that are hauntingly beautiful when well done. I liked it, what do you think?

aMUSE is an eclectic collection featuring pop art, leather and animal prints. Most of all, it’s classic Biddell: loud prints, architectural shapes, fringe, leather and drapey asymmetry. Rita Tesolin created the jewellery. It’s massive. After the show Evan commented on how some broke due to the weight back stage. The next day I saw Stacey McKenzie rocking one of the runway looks. She created some contraception using tape to keep them on. Oh those fashion secrets.

Classic Biddell isn’t something that only gets love from me. The collection needed to be bigger and it lacked the cohesion delivered in spring summer 2011. I liked his idea of a conveyor belt runway. It screwed with some photographers through.Â  You can see the rest of the looks from the Spring Summer 2013 EvanÂ  Biddell show at World Master Card Fashion Week after the jump.

END_OF_DOCUMENT_TOKEN_TO_BE_REPLACED

The spring summer 2013 Pavoni show was fun. I usually don’t pay much attention to evening wear and when I do my style is sleek and understated. I saw Sister Act, The Musical a couple weeks ago. That show was full of sequins. There were everywhere and the light hit them from all angles. I was memorized. A sequin/shiny switch clicked in my brain and now I’m paying attention.

Designers Gianni Falcone and Mike Derderian were inspired by Le Chateau de Versailles and all the opulence of that doomed age. The guys had this to say about their inspiration:

“The allure of decadence, the glamour of a time long passed… This season, “Le Chateau de Versailles” and all its opulence becomes our muse. Let this PAVONI collection whisk you away to a place where sultry lace, jewel encrusted silk, glistening gold and unbridled romance defined an era! Sneak away to the lush royal gardens to steal a kiss under the moonlight, or dance till dawn in the hall of mirrors. For tonight, the world is yours for the taking…â€

It’s a treat to see over the top evening wear on the runways in Toronto. The dresses are expertly crafted and exquisite living up to the Pavoni name. Pavoni is peacock in Italian.

This is what Maybelline New York’s Lead Makeup Artist Grace Lee had to say about the Pavoni makeup inspiration. You can see Pavoni Spring Summer 2013 beauty shots on the Maybelline flickr site.

The vision for Spring 2013 is high glamour, inspired by Versailles. A makeup artist’s dream, the look was lashes, liner, contouring and highlighting. Models wore decadent gowns and lids shimmered with gold and brown hues, while pouts were perfected with Color Sensational High Shine Gloss in neutral tones.(source: Press Release)

I’m never in the market for an ornate gown but the cocktail dresses and gowns in good old black and embroidery heavy black and camel are looking good to me.

END_OF_DOCUMENT_TOKEN_TO_BE_REPLACED

“This collection has been inspired by geometric shapes, sharp lines and defined angles. I have incorporated an intricate geometric cut or detail into each piece of the collection in a non-traditional manner. The end result is a collection that dynamic, exciting and ultimately Pink Tartan this season.â€ â€“ says President and Head Designer, Kim Newport-Mimran (source: Press Release)

The collection looked influenced by the 50s and Greaser culture. There were plenty of full skirts, sweetheart necklines and high-waisted bottoms. There were a lot of classic shapes featured but the details were in the fabric and colour choices. I enjoyed the contrast of the show. There was the first, lighter half with the delicate mint, pink, white and silver. The brocade details add some texture and uniqueness classic looks.

The second, darker half of the collection featured black and gold. It reminded me of when Sandy gets into her hot leather gear at the end of Grease. When Sandy isn’t wearing leather, I picture her wearing these Pink Tartan pieces.

I like the daily dispatches at fashion week. Maybelline sends out makeup updates. Here is what Maybelline New York’s Lead Makeup Artist Grace Lee came up with for Pink Tartan. You can view Pink Tartan Spring Summer 2013 beauty shots on the Maybelline Flickr Page.

Maybelline New York makeup artist Grace Lee created a natural, soft look. The delicate makeup was a mix of gorgeous dewy skin and feminine pink lips â€“ complimenting the clean, architectural lines of the collection. Kim Newport-Mimran, President and Head Designer of Pink Tartan, is always on the lookout for what is fresh, new and inspiring â€“ so having Maybelline New York muse Charlotte Free open and close the show ensured that these three elements were brought to the runway.(source: Press Release)

This was also the debut of the Pink Tartan x Aldo Rise shoes. Glad to see another Canadian in the program.

Kimberley Newport-Mimran, President and Head Designer of Pink Tartan, teamed up with ALDO to design footwear as part of the ALDO RISE program. Working in collaboration with the ALDO footwear design team, the result is a timeless yet contemporary single soled pump that hits key trends for the season. Presented in graphic black and white, the block trapeze-shaped, metallic electroplated heel adds a chic modernity to the classic leather upper and almond toe. Equally luxurious is Pink Tartan’s signature quilted clover with repeating pattern on the leather insock and lining, offering the ultimate in comfort and sophistication.

“We’ve been fans of Pink Tartan from the get-go. They’re a proudly Canadian brand that continues to raise the bar while delivering right on target. Working with Kimberly has been a genuine pleasure – she’s a class act. Her elegant taste and timeless aesthetic pushed our design team to develop a style that feels like an instant classic.â€ – Douglas Bensadoun, Creative Director â€“ VP Marketing, ALDO Group.

I enjoyed this collection. I thought the mint and pink would turn me off but I’m getting softer in my old age. It’s pretty easy to buy my love with full skirts in most absolute favourite length, the Tea Length. You can see the rest of the looks from the Spring Summer 2013 Pink Tartan show at World Master Card Fashion Week after the jump.

END_OF_DOCUMENT_TOKEN_TO_BE_REPLACED

The tile of this post is a bit of a misnomer because Holt Renfrew didn’t show any looks from the spring summer 2013 season. Instead they opted for a showcase of merchandise Canadian and international that is available in stores now. I don’t have much to say about in general since these clothes originally went down the catwalk in March.

“Tonight we’re proud to present a special take on ‘Canadian Catwalk’ — celebrating Holt Renfrew as the destination for those who love fashion”, said Alix Box, Senior Vice President of Sales & Marketing for Holt Renfrew. “Our runway showcases this unique moment in our 175 year history with an inspiring collection of contemporary and designer fashions to wear right now.â€(source: Press Release) 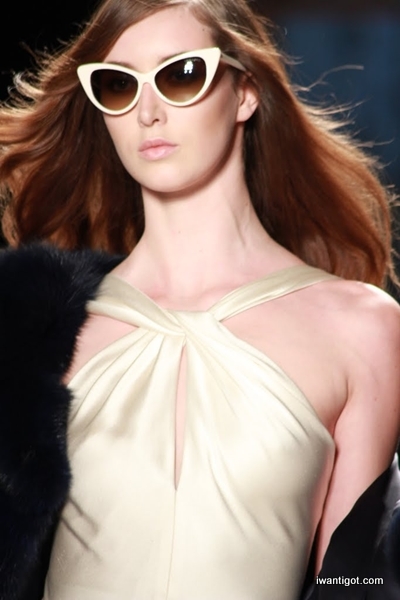 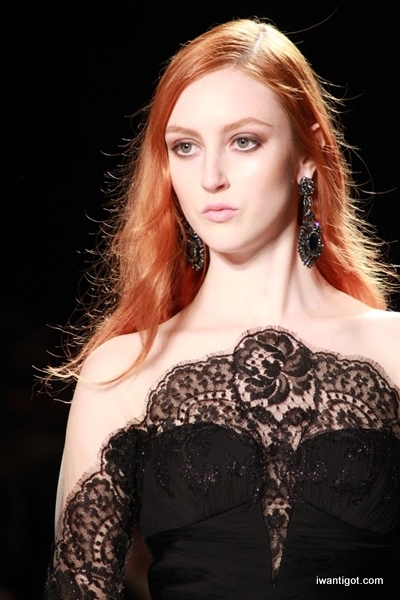 Holts opted to hold a breakfast fashion show that showcased their Canadian designer’s spring summer 2013 collections. I missed this cause it was too early in the morning, ha ha. 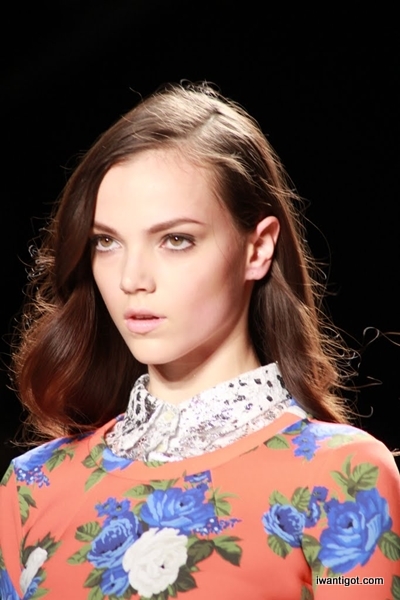 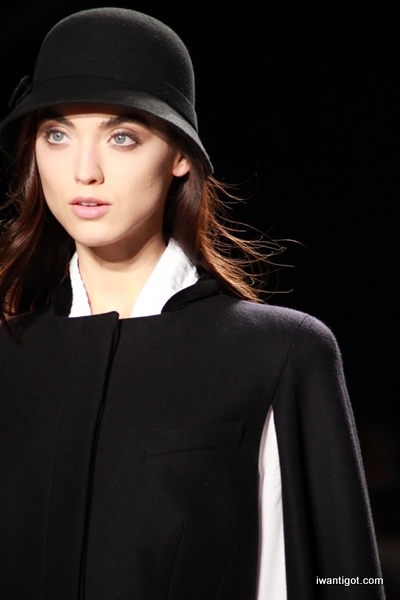 It was an uneventful show but I bet this gamble paid off for Holt Renfrew. I’m sure it stirred up some fashion emotions in people and I bet sales in the items featured are up. I’m kinda surprised Holt Renfrew didn’t show in season merchandise for all their runway shows. There were a lot of drool worthy items in the show and I love, love, love this Celine coat.

Photos: Paul Ross and Mirian Njoh for OPIQUE / Top of the Runway