So I’ve been drooling over HermÃ¨s scarfs for a long time on I want – I got.

Containing 65 grams of silk from 250 cocoons, 90 centimetres square, the Hermes scarf has become a standard for good workmanship and discreet luxury. It requiring up to two years of work to produce one of these wearable art that is an expression of its style and luxury.

I decided that I would take advantage of the HermÃ¨s special Silk and Accessories Sale. It’s a biannual event that is in support of Multiple Sclerosis research at St. Michael’s hospital. The main thing about this sale is discounted ties and scarves.

I didn’t want to brave the crowds and crazy fighting womens so I hit up the sale at the end of the day and took my chances. I had a friend contact me during the day telling me to get my butt to the Metro Convention Centre so I could get in line with her. It didn’t work out so I arrived after work to a very quiet sale.

I checked out the scarf table and there was a lot of the Indian Rain prints from Spring 2008. They were quite pretty but nothing I really wanted to spend my money on. I wanted something that was intricate and colourful. I wanted it to know that a lot of silk screening went into the scarf. I was ready to call it quits and make plans for the sale in 2011 when a random women returned this beauty to the sale table. 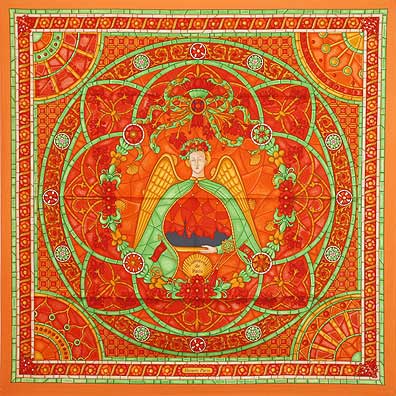 The style name is Lumieres de Paris and it’s by the artist Natsuno Hidaka. It was originally issued in 2006 and also came in a blue version. This stained glass reproduction was definitely something I could see myself spending money on. 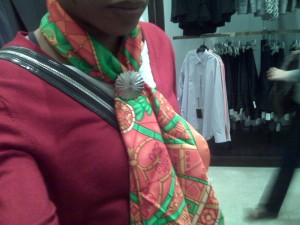 So I bit the bullet and fulfilled one of my fashion fantasies. I now own an HermÃ¨s scarf at 52% off. That discount comes at a price, there were no iconic orange packaging to be found. Everything was put into discreet white paper bags. This again goes to my theory about luxury packaging making up half the price of goods.