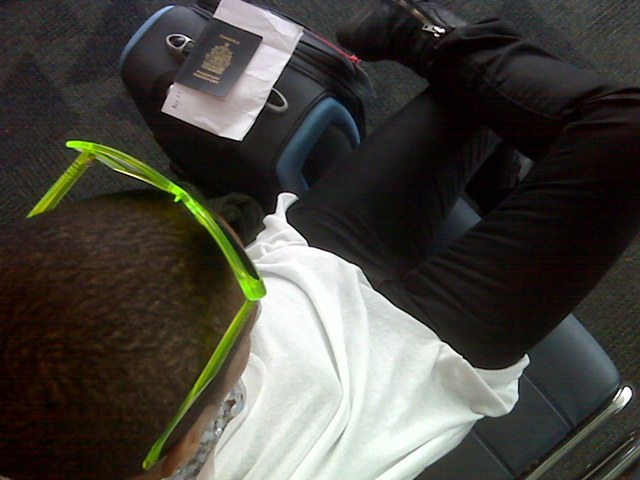 Klout is a company that uses twitter analytics to determine how influential you are on the medium. I’ve always been interested in these measurement techniques so I signed up for the service.Â Â  It works about as well as the rest of them do which means take it with a grain of salt.Â  Many months later I get an email from Klout telling me I have a free flight on the new Virgin America route from Toronto to San Francisco or Los Angeles. I just had to pay the taxes and fly before the middle of August. This was great as I have a good friend who lives in Santa Monica. It took me a couple of weeks to confirm my dates and I prayed that there were still flights available. Well there were and I spent the Civic holiday weekend in beautiful California.

I arrived at terminal 3 super early. I remembered my last flying experience to New York and how crazy the security and customs line was. I didn’t to repeat running to the gate again. It was a breeze this time around and I was way too damn early. Can’t win. The flying experience with Virgin was pretty good. The planes were nice except the headrest on the car was the most uncomfortable thing ever. It made for terrible sleeping. They have a three levels of class on Virgin and I took the lowest class. The taxes on first and main cabin were ridiculous. Some inflight entertainment was extra, like some movies and tv. I though that was a bit much. 8 bucks to watch The Bounty Hunter on your 7 inch screen. WiFi is $13. I received from free wifi codes to use but I really didn’t feel like opening the netbook. I wish I had my new iPod touch during this trip. Food and alcohol is extra as I expected.Â  The only thing I watched was the map of our flight.

Flying into LAX was interesting. It was 7PM and the city was covered in this horrible brown haze. I’d never seen anything like it. So this is the infamous LA smog, lovely. Paul & Lauren (his finance) grabbed me at terminal 3. LAX is a huge maze of 8 terminals. I didn’t see any celebs or paparazzi around. Actually my visit to LA was completely celeb free. I didn’t see anyone famous. Actually, I saw a lot of superheroes. My first night consisted of a little dinner at Bodega Wine Bar (814 Broadway) which is one of Paul and Lauren’s regular spots.