Nicholas Kirkwood knows how to make a covetable shoe and I’m loving these two different sandal styles from the Spring Summer 2013 collection. Both shoes are available at ModaOperandi.com, Metallic Sandal at $850 and Blue Pois Sandal at $995 images: modaoperandi.com

Sneaky emails and reminder tweets enter my social space once the major discounts start hitting The Room at the Hudson’s Bay. It’s a good time to be hunting for bargains. It’s during these sales periods that I get strategic about things. It’s about desirability of the brand and price. During this magical time that ownership of the brands I lust for becomes attainable. The Room blessed me with an amazing Christopher Kane skirt. The Room has a great selection of shoes and the pickings are getting pretty slim by the time it’s 60% off plus an extra 40%. This shoe shopping experience was extra fun because I coerced my friend, Natalie into coming. There were a few choices of from my watch list of designers: Kirkwood, Sanderson, Olympia, Alaia, Atwood, Margiela. I tried on a few and stared wistfully at some wishing I had the same size feet as Stefania from Textstyles.ca. I wandered the racks several times with a pair of pretty loud Erdem x Nicholas Kirkwood ankle boots. They were a thick tweed …

Nicholas Kirkwood hasn’t been featured on the site in awhile. These colour block suede and patent leather platform sandals are so much fun. I’m jonesing for summer again. Available at net-a-porter.com. images: net-a-porter.com 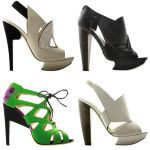 Nicholas Kirkwood shoes These are not for the faint of fashion. Kirkwood is genius. An alumnus of prestigious design schools Central Saint Martin’s and Cordwainers, 27-year-old British designer Nicholas Kirkwood launched his eponymous collection in Spring 2005. The collection of architecturally inspired pieces with a blend of genres subverting the relationship between tradition and modernity instantly won the attention of Grace Jones, Daphne Guinness, the late Isabella Blow and Cecilia Dean of Visionaire as well as rave reviews from industry insiders…Kirkwood’s shoe making talent has meant he is much sought after by the design community. Recently French fashion house ChloÃ© employed him to consult on their AW 07 collection. Kirkwood has collaborated with an array of established and emerging designers including Gareth Pugh, Zac Posen, Phillip Lim, Doo Ri, Boudicca, Belstaff, Basso & Brooke and Louise Goldin.(source) Nicholas Kirkwood is available in Toronto at Plum Shoes 29 Bellair St. (at York ville Ave.) 416 964 141 images: Nicholas Kirkwood