I’m in love with these spring summer 2011 Viktor & Rolf shoes. It’s the colour. 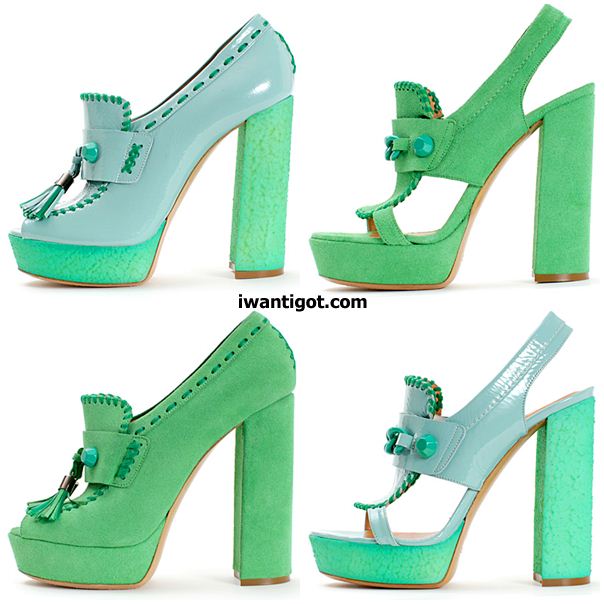 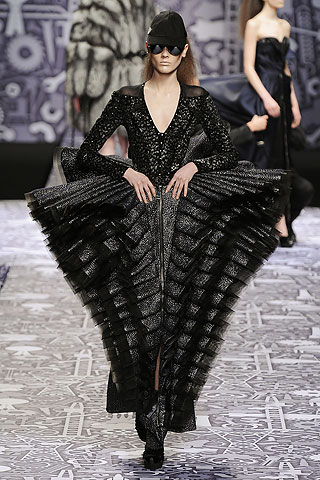 Viktor & Rolf called their fall 2010 show Glamour Factory. It’s a fitting name for the spectacle they put one. They revisited their decade old Babushka themed collection and added some 21st century twists.
The presentation needs to be seen so I have video. It’s just perfect. The soundtrack is amazing, I need to track down the songs. The collection is very sporty and the models wore baseball caps. The clothing is pretty standard except for the few show pieces. I think most people will remember the presentation itself, which as a piece of performance art was pretty amazing.

God, that soundtrack. I must have it. 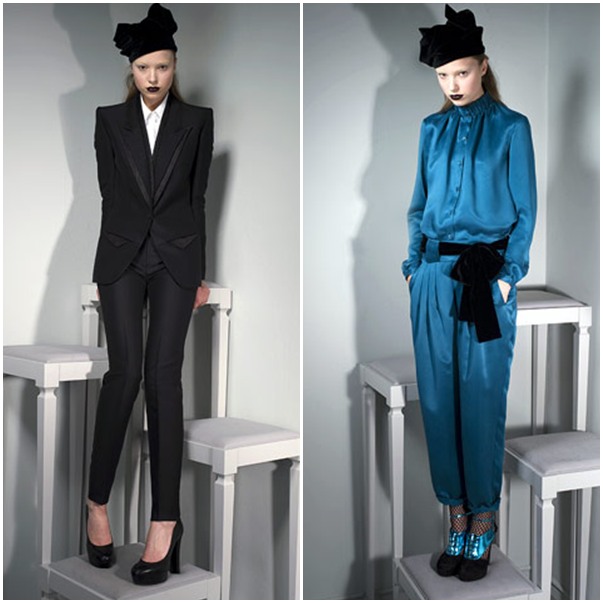 Viktor & Rolf went from crazy cutouts to more of their classic menswear inspired looks for the Pre-Fall 2010 collection. The black and white focused collection had two spots of colour, fuchsia and teal.Â  They are cute jumpsuits too. 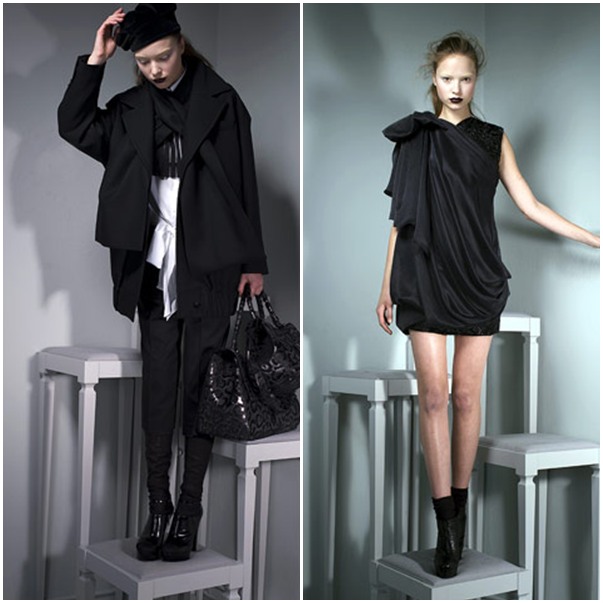 I even like the little hat. I wonder if it’s styling or part of the collection. 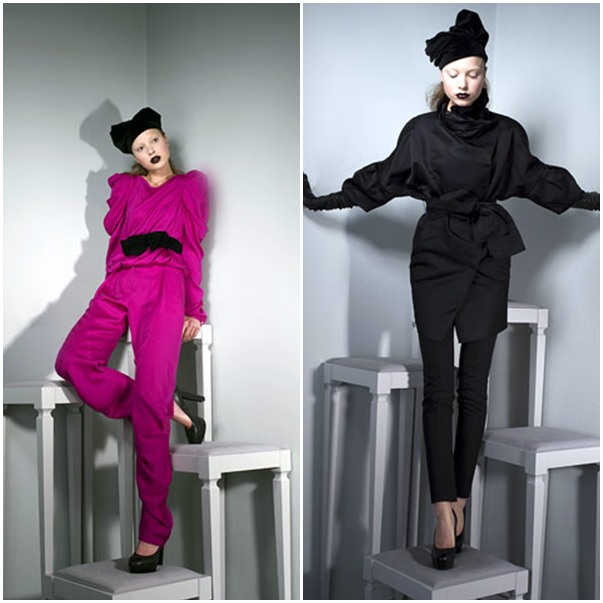 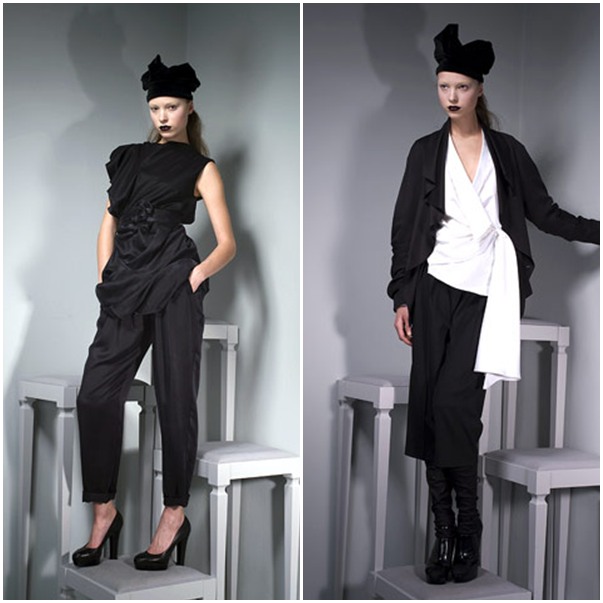 I received the Flora by Gucci Eau du Toilette in a swag bag from an event. I can’t remember which one (If any friends out there remember what event, please comment!). I like floral based perfumes, so I thought I would give it a shot. Turns out I like it. It’s sweet smelling; a mixture of fruit and flowers at first. It finishes with a heavy base. I don’t normally like patchouli but it works for me in this combination. It’s a girl’s fragrance and nowhere near the androgynous zone. It’s very strong and you have to remember that when applying. I do find myself reaching for this perfume a lot in the morning. 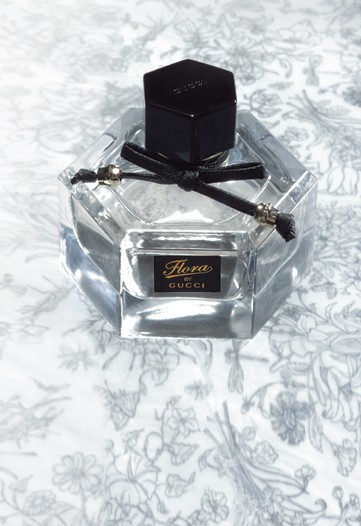 Flora’s olfactory pyramid is composed around the floral theme, with top notes of citrus and peony, a heart of rose and osmanthus â€” a Chinese flower with a distinct floral fruit and leather aroma â€” and sandalwood and patchouli on the base. Giannini and the P&G fragrance team developed the scent with Firmenich.

This is Gucci’s second perfume geared to the younger customer. I always love to read about inspirations.Â  I thought the perfume and the ads were beautiful.Â  I love the long black and white silk chiffon gown. 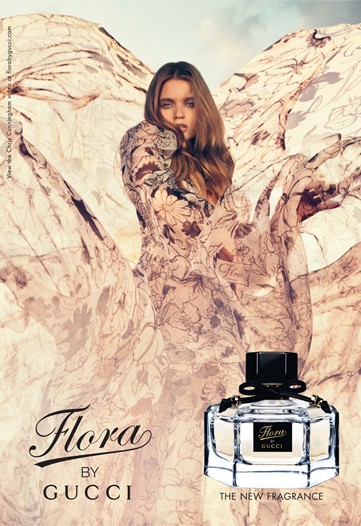 Turning to the archived Flora print for inspiration for the scent’s concept came naturally to Giannini. First used on a Gucci scarf made for Princess Grace in 1966, Flora was also utilized on many different Gucci apparel and accessory items â€” some of which Giannini’s mother wore.

“I was in love with the idea of a floral fragrance, and having the idea of naming the perfume Flora, everything was consequential. I wanted to give Flora a new freshness, so I decided to keep the same floral pattern but make it not so literal with all 25 colors, but black and white, more graphic and correct for the project,â€ said Giannini…

To design Flora’s hexagon-shaped clear glass flacon, Giannini recalled the architectural lines of the Gucci by Gucci bottle. Giannini also chose to accent the juice a champagne color and incorporated another of the Gucci motifs in the small bamboo gold tassels trimming the ends of the black ribbon bow tied around the flacon’s neck.

The Gucci website says the font used to write Flora on the bottle is from the script of Guccio Gucci’s signature. The commercial by Chris Cunningham is very cool.

The black-and-white Flora print is featured on the scent’s packaging, but Giannini also printed it onto a butterflylike long silk chiffon gown worn by Australian model Abbey Lee in the scent’s advertising campaign. Shot by Chris Cunningham in a cornfield in Latvia, Lee is depicted in the middle of more than 40,000 silk flowers moving in tempo with the wind to the tune of an original remix of Donna Summer’s “I Feel Love.â€ Inez & Vinoodh photographed Flora’s print advertising visuals.

And her’s the making of Flora commercial video for kicks.

I like Flora more than the Givenchy Hot Couture Eau du Toilette I received in a swag bag last year. Swag bags are the only reason I started wearing perfume again. I went years without it. I like Viktor & Rolf’s Flowerbomb the best. I think Hot Couture, Flowerbomb and Flora are similar enough to make that kind of comparison.

All quotes are from WWD: Gucci Fashions a Flirtatious Fragrance
images: wwd.com

There was no way I was going to not enjoy Viktor & Rolf’s Spring 2010; Roisin Murphy was singing. However, it wasn’t until I saw the collection I didn’t realize the added bonuses I would get: 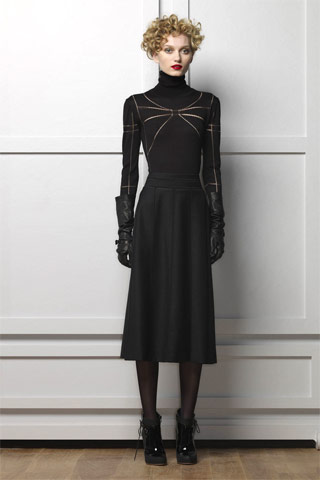 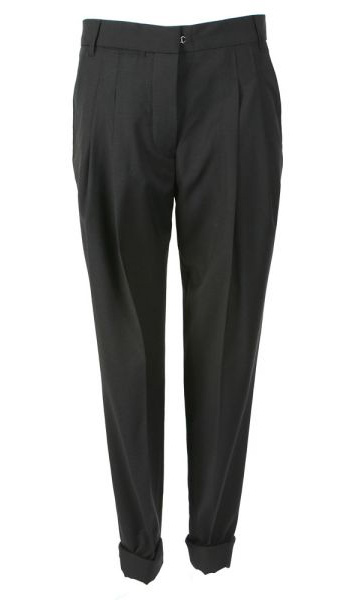 These high waisted wool blank pants are amazing. I have been looking for a still haven’t found a pair like this and I’m still searching

Very pretty and wearable collection, however it didn’t grab me like Fall Winter 2008.

Didn’t change my mind about the collection too much, but props for using Skinny Puppy

Everyone was peeing themselves over this collection in NYC

I didn’t do a dedicated post to this collection but I quite liked it.

I include this only because the presentation is great. I really like the side views. The clothing on the other hand….

I’m so late in seeing these

Daria in a bikini

Update: I had to remove the last commercial since the youtube user stopped hosting it.

This is very, very interesting!

Renzo Rosso, the Italian industrialist behind Diesel, has acquired a majority stake in the Dutch designer firm Viktor & Rolf with ambitions to build it into one of the “top reference fashion houses of the future.â€

Financial terms were not disclosed, but Rosso told WWD he plans to make major investments to bolster the duo’s ready-to-wear business, add licensed products such as eyewear and jewelry, plus open freestanding stores in high-visibility locations.

I did not attend. I really though about it for a moment. I’m just not ready to beat people for H&M clothes. Real Viktor & Rolf clothes at H&M prices would warrant me getting into the girl stomping mood. I’d make sure to wear my best stomping boots. I was in H&M on Friday and a sale associate told me the collection sold out in 15 mins. He also mentioned that it was ugly. I did see few pairs of the tuxedo pants left. They didn’t seem any different in quality to any other H&M product.

I thought the collection was pretty nice overall and there was a few pieces I liked. The only thing I wasn’t jazzed about the hearts. I don’t think I’ll ever try to buy anything from an H&M collection, even if it was Alexander McQueen. It’s just too much trouble and I don’t care enough. 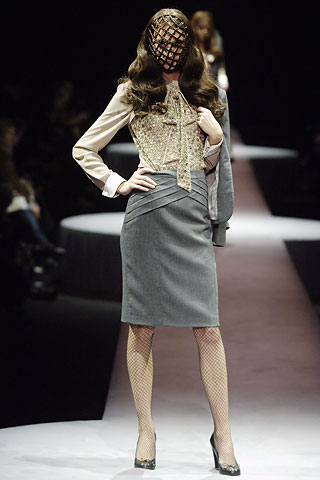 After rumours of Prada working with H&M were squashed I’ve been wondering who would be next. The Daily has told me that it will be Viktor & Rolf. They will do men’s and women’s collection. I have never lined up for any of H&M’s designer collections, much too lazy. Karl’s collection did nothing for me (sorry Karl, I do like your stuff) and there were a few pieces I liked from Stella. I could line up for Viktor & Rolf, potentially even beat people. Time will tell, the collection is suppose to drop Novermber 2006.