So Hermes makes “the” scarf. I decided to do some browsing myself and found some very nice looking ones. 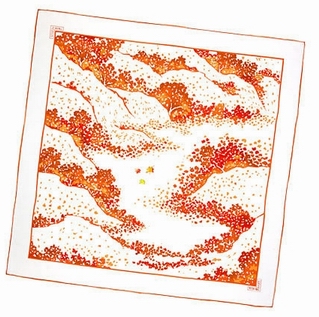 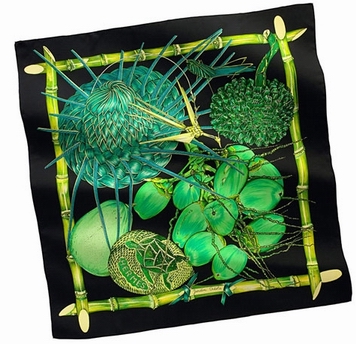 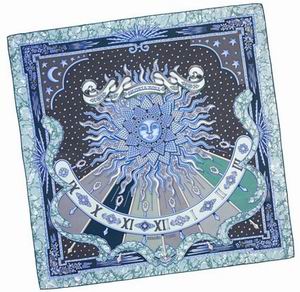 There are so many choices on the site, do check it out.

I became interested in the history of these scarves and started searching.

Containing 65 grams of silk from 250 cocoons, 90 centimetres square, the HermÃ¨s scarf has become a standard for good workmanship and discreet luxury. It requiring up to two years of work to produce one of these wearable art that is an expression of its style and luxury.

In 1956, a HermÃ¨s scarf was shown on a British stamp in 1956, worn by Elizabeth Windsor, and another on the cover of Life with Grace Kelly. Later, the singer Madonna worn one as a bustier. Other famous wearers include Audrey Hepburn, Jackie Kennedy, the duchess of Windsor and Maria Callas. I doubt that any woman who can afford it does not own at least one or two examples of this ultimate fashion accessory of â€˜good taste’ and beauty.

A HermÃ¨s scarf is worn in many ways: on the head, round the neck, on the shoulders, as a waist sash on jeans, hunging from a shoulder bag. Just note that silk is incredibly slippery and the scarf, however worn, needs to be secured well (with knots, brooches, under loops for belt or scarves), or it will slip quietly away, never to be found by its owner.

The current price of a new HermÃ¨s scarf is USD$299.00 Pre owned scarves can cost from $150 to $600 for the most collectible. Some collectors are know to own hundreds of scarves.

Over 1,000 HermÃ¨s designs have been created since then.

The famous carre is 36 by 36 inches and requires 250 cocoons to make a single scarf. Every scarf tells a complete story.

A palette of more than 50,000 colours is used exclusively by HermÃ¨s to achieve the greatest detail possible.

There are two collections per year: 6 re-issues in new colour combinations,.

The best silk is used to make Hermes scarves at the Hermes facilities in Lyon. We take a look at the history of the first Hermes scarf. The History of Lyons Silk The Chinese were responsible for developing the silk process. It came to Europe in the early sixth century. Firstly to Constantinople, then spreading to Greece, through Italy and into Spain. In France, Lyon set up looms in 1450 and Tours followed in 1470. The Fashion Behind Hermes Scarves Fabric prints became an art form early in the 20th century. In 1911, Paul Poiret engaged Raoul Duffy to design fabric prints. Elsa Schiaparelli built on this and persuaded artists such as Salvador Dali to create elaborate prints for her fabrics.
In the 1920s, industry manufacturers, particularly Bianchini with silks, developed the use of French textiles and enabled the fashion designers to introduce new forms and fluidity. By the 1930s, Italy was the largest silk producing country in Europe, while France took second place. Lyon, located 462 KM from Paris and the Hermes headquarters, was at the heart of the French industry. Today, silk production in Lyon, where Hermes still has its manufacturing facility, is less significant.

The First Hermes Scarf
Hermes followed on the success of the new textiles and innovative designs by introducing the first of its Hermes scarves in 1937, in conjunction with its 100th anniversary. With the Japanese attacking major Chinese cities the same year, and the start of World War II in 1939 bringing shortages and a make do and mend attitude, this might not have been viewed as a prudent commercial move. The original Hermes scarf was called “Jeu des Dames Blanches” and its creative design captured much of the symbolism and history of both Hermes and France, its country of origin.
The omnibus first came into use in Paris in March 1662, following an edict by Louis XIV, but they were quickly withdrawn. The omnibus was relaunched in 1827, exactly 110 years before Hermes introduced its design. London saw its first omnibus in 1829 and New York in 1830. The early European omnibuses were pulled by three horses abreast, but the later ones, as featured on the scarf, were pulled by only two.
The main French manufacturer of omnibuses in the 19th Century was Dames Blanches, and the company had given its name to a popular board game of the period. The centre of the scarf features these 19th century game
players, dressed in the fashion of the period and in deep concentration for this social game.
At the time of the Hermes scarf launch, the working horse had declined in popularity. Ownership of motor cars was increasing, the speed limit in England had been increased in 1930 from 20 to 30 miles an hour, and in
September 1937 The Times reported that the first motor trolley-bus had left Wandsworth for Battersea, replacing the tram.
The simple, first design was a superb positioning statement for Hermes. By association, the Hermes tradition of saddle and harness making, its passion for horses, the luxury of royalty, its Parisian connection, its concern for the environment, and its place in history, all come to the fore. The Hermes scarf designs continue to speak for themselves.

Hermes Scarf and Silk Facts
Hermes scarves are made of 20mm silk – other manufacturers’ weights usually range from 4mm to 16mm.
The Hermes silk carre measures 36 inches square.
Each Hermes scarf carries the signature of the designing artist. (source)