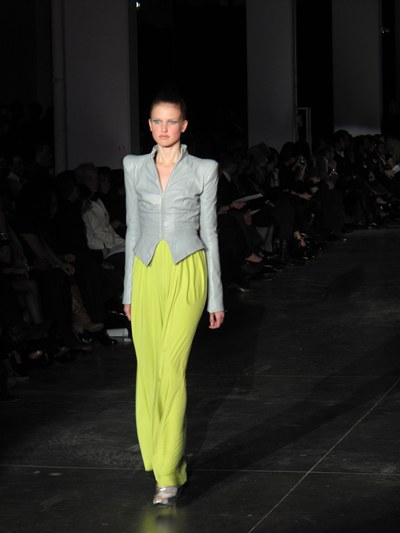 The clothing was one part of the huge fashion event put on by Greta Constantine and their slew of sponsors. The backdrop was the Audi Dealership on Bayview. That should have tipped me off to the scale of the event to come but I really didn’t think twice about it. It wasn’t until I stepped outside the cab. I arrived a little early and walked through the back entrance to the main floor of the dealership. It was full of an excited energy. people were running around everywhere getting everything set up.

I looked to the right and there was a huge wall of Greta. Huge images of Kirk and Stephen, Coco Rocha for Greta Constantine and Erza Constantine alternated with the Greta Constantine logo. I’ve gotten to know Kirk and Stephen over the years and it was a little emotional to see this display. I looked around at this massive production they have taken upon themselves and I was in awe. I was so proud and very excited to see how it played out over the course of the night. 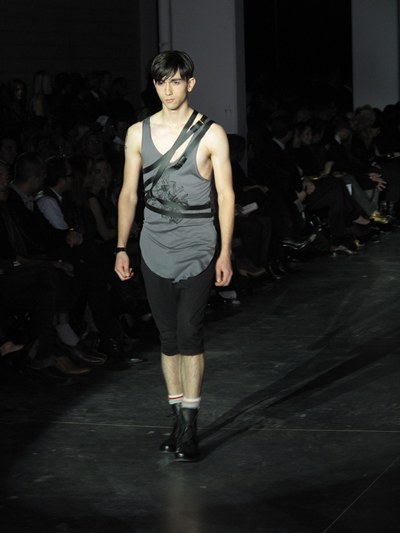 The crowd slowly began to arrive. It was a constant flow of fashion media, retailers, socialites, sponsors and fans. I met the old school supermodel Eve by Alan of Giovanni. I was swooning, she was so nice. She also recommended some espresso have. She was getting one at this DeLonghi espresso machine demo.

After drinks and appetizers, the crowd walked down the Holt Renfrew red carpet to the lower level parking garage. When I walked through the threshold to the runway room I laughed at the size of it. I heard the runway was 140 feet prior to the show.Â  I couldn’t picture it until immersed. The ceilings were enormous with exposed pipes and tall pillars. It reminded me of my youth, a rave I attended was in an empty warehouse in the west end of Toronto. The room had a vibe of secret underground party with a room full of well dressed people. It wasn’t as big as the tents at Byrant Park, but it the biggest runway room I had seen in Toronto. 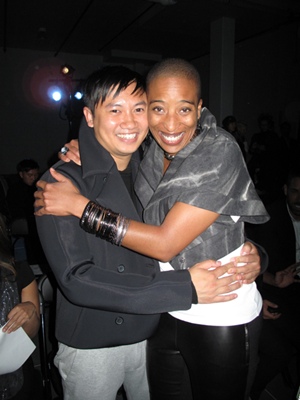 I was sitting near to Tommy Ton who just returned from Paris. I got to give him a big bear hug and congratulate him on his current success. I’m so proud of that his talent is now recognized worldwide. I got to know Tommy on my trip to NYC for the Spring 2008 collections. I’ll always remember us standing outside of Rodarte and Proenza Schouler. I’m team Tommy all the way 🙂

The show opened silently with three models that were wearing seatbelt creations walking from the photographer’s pit to the beginning of the runway. They were milling around upstairs chatting up the guests and giving people a closer look. The runway music started which was an eclectic choice of different styles. Everything was going smoothly with the show then one of the ridiculously expensive (talking six digits I think) Bang and Olufsen speakers blew. It was really loud before but I wasn’t thanking the gods when it stopped producing sound. It really added a distraction to the show. I can’t remember any of the tunes now. I blocked the music when the speaker blew. 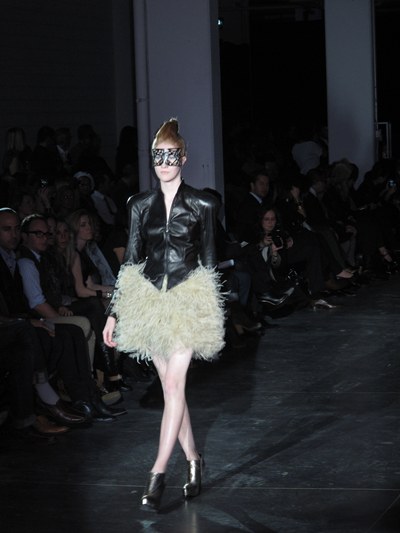 Female and male models walked the runway in various combinations but with no set pattern. Black, white and grey dominated both sexes on the runway with splashes of colour by way of sunburst prints, bright yellow and red. Feathers, leather and jersey were the fabrics of choice. Shirts were draped and crotches were dropped. The women’s hemlines weren’t telling you anything about the stock market because they were short and flirty or long and lean. Fringe, masks and bondage belts accessorized both men and women. The collection’s streetwear influence was easy to spot. It was interesting how that tougher style was paired with feathers, flowing prints and colourful jersey. 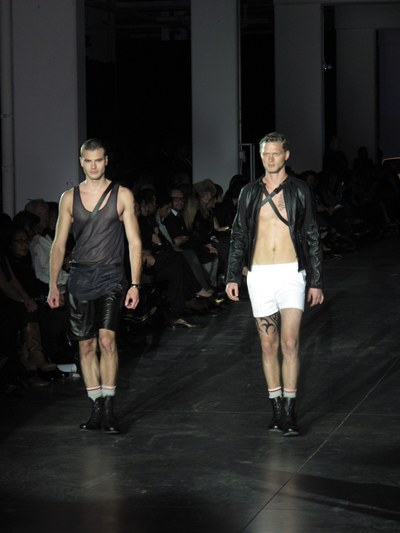 I had seen a lot of the clothing in the studio and was able to touch them and get a good look. I was surprised at number of looks that were new to me and ones that weren’t shown. There were a few jersey dresses to represent their signature style but I enjoyed seeing long skirts dominate. Separates were more plentiful than dresses. More than one person I talked to after the show lamented about the lack of jersey dresses in the collection. One of the finale pieces was a silver grey silk gazar dress that billowed as it walked. It reminded me of the Lanvin Spring 2008 finale dress, GC upped the sex appeal and made it shorter in the front. 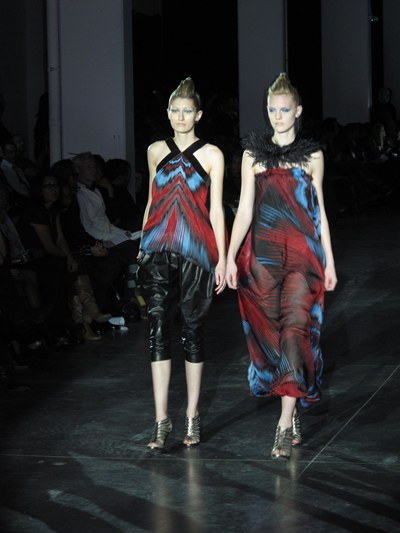 I was drooling over all the black outfits with the white piping. The sunburst print pieces were beautiful. The grey leather jacket was refreshing, in fact I loved it paired with the yellow jersey. I need the leather shorts for women, not sure how summer friendly they would be. I do know the leather is pretty light but I still doubt it’s comfort in 30 degrees. The leather jacket paired with the feather skirt was a big win for me too. In the men’s collection featured a lot leather, sheer and draping. I felt the sleeveless hooded poncho was the standout piece of the collection. 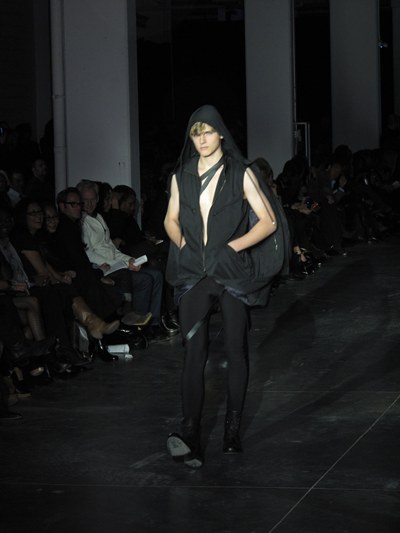 All the clothing was beautiful, I loved it hanging off the racks and also on the models. There were a few presentation aspects of the show that I had some issue with. I felt the presentation was a little all over the place. I would have liked to see the men and women segregated. It would have allowed us to see the cohesive nature of the Erza Constantine collection. The women’s collection wasn’t as cohesive as the men’s. I was told this was buy design. There were some themes that I would have liked to seen grouped together like the prints and pieces with feathers. These comments say more about me than Greta Constantine. I really like themes and the execution of them. Many designers don’t keep things as cohesive as I like I felt Celine and Dolce & Gabanna achieved this season. Maybe I should get over it, but something about it makes me smile.

Well, my pictures really turned out crappy because of the lighting and I didn’t have my beloved Paul Baik with me to snap the good stuff. I did borrow some photos from my friend Jason Howlett who had a great view of the runway. It’s not the full collection. He’s got some great backstage shots of the show. I’ve included my photos in a slideshow just in case you want to look.