2016 *shakes fist*. What a strangely wonderful and horrible year. This year took several of my important cultural idols: Bowie, Prince, Phife Dawg. It hit hard and deep. On a personal level, I didn’t do much with this space here, my blog. I spent a lot of the year pretty miserable with my professional IT life. I lost interest in the celebrity/influencer obsessed version of fashion that was being put out there. I couldn’t take another thing about the spawn of billionaires and celebrities. The lack of diversity irritated the fuck out me and I took steps to cut that media out of my regular routine. I wasn’t bored of clothing but I was definitely bored with the industry. I didn’t feel the need to talk to the world via this blog as much this year even though there were things to celebrate. I’m going to change that in 2017 but first, here are my biggest moments of 2016. Some are lovely and some hurt till this day.

Skating on the top of 120 Adelaide Street

Skate of a lifetime on the rooftop rink situated at 120 Adelaide. Thanks Molson Canadian #Anythingforhockey for the invite! What an amazing and expensive feat you’ve accomplished

Molson Canadian invited me skate on the ice rink they built on top of 120 Adelaide Street in the Financial District. You don’t say no to bucketlist worthy times like this. 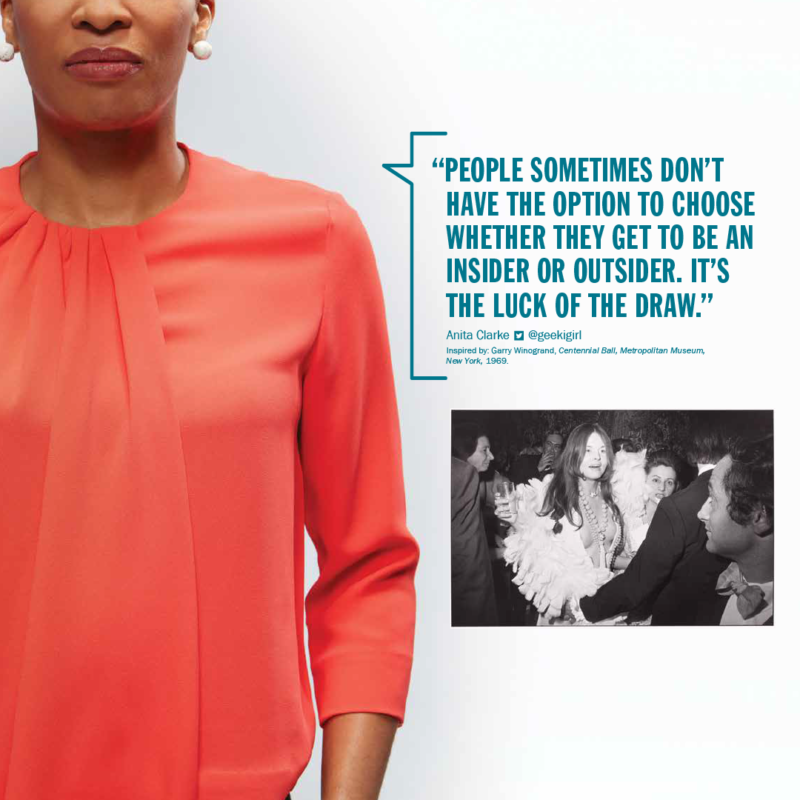 Fun things via random emails still are happening to me, yay. This year I was part of an ad campaign for the Art Gallery of Ontario. This was a super fun gig and I love the AGO so I was happy to participate. 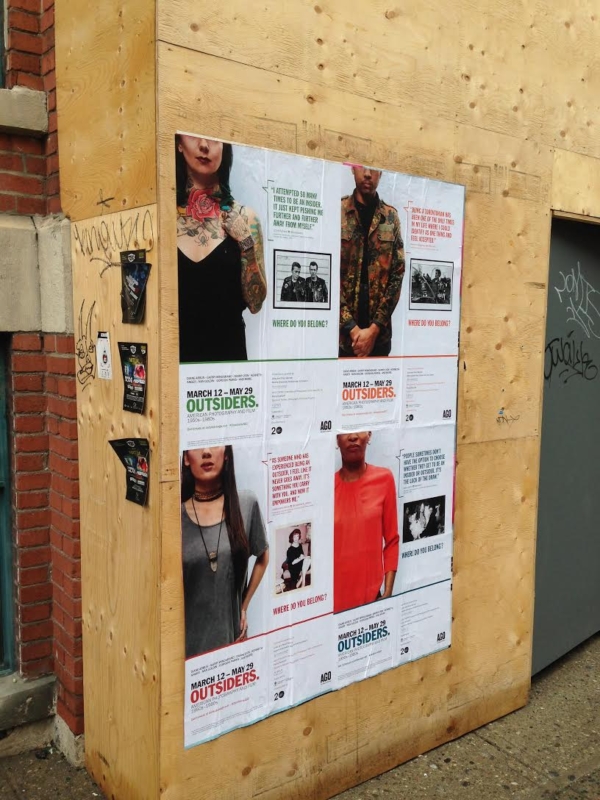 The campaign was plastered all over the city so you could see my mug on hoarding or bus shelters. I’m amazed that this has happened to me again. I’m one lucky mofo. What are the odds after the Mastercard Stylicity gig.

There was a video component to the campaign. Everyone selected talked about how they felt about Outsiders and Insiders.

I had to say goodbye to my beloved cat Sagan. It hurts.

RIP Sagan. 05/15/04 – 03/17/16. Sagan and Sally Sally came to join in me the big city from the farm at 3 months old. She's named after my favourite scientist and almost called her sister Carl. She had the nickname Little Sweet Girl. She was a bit of a scaredy cat but those she let in understood how appropriate that nickname was. She was a wonderful companion who always comforted me on my worst days. Sally Sally and I already are missing you. Thank you Ron Perrault for bringing her into my life. It honestly was one of my dreams growing up as a child to have a cat ??

It kills me that this doesn’t happen anymore. I feel terrible that Sally Sally’s sister isn’t with us anymore.

My winter trip to Whistler had unfortunate timing. Sagan passed two days before I got on the plane. I felt like a terrible cat mom leaving poor Sally Sally at that time. I really needed the time away, my head was a mess. The conditions out there were incredible and Whistler was having a record snowfall year.

It was my best winter trip out there. The skiing was excellent and it was warm enough I got a bit of hiking done in the valley.

I had fantastic weather because I brought a heat wave to Whistler with me. It was 30 degrees for the week I was there and no rain! I hiked mountains and went trail mountain bike riding for the first time. The feeling when riding a full suspension bike through the forest with a mountain to your left and a lake to your right is something I’m never going to forget.

At the halfway point to Singing Creek. How I'm smiling after a painful, painful 7 km ascent I have no idea. Thanks Coastal Culture for hooking me up with this sweet ride. #gginwhistler #whistlerismyhappyplace #whistler #littlethingswhistler #explorebc

Another #whistler bucketlist item was to see a Hoary Marmot in person. Well, I got the best Hoary Marmot experience! The only thing missing is the damn whistling. I ?? Hoary Marmots! #whistlerismyhappyplace #littlethingswhistler #hoarymarmot #marmot #explorebc #marmotlove

My Bespoke Coat by Philip Sparks

This is a face in love. I need you to snow one more time before next season weather gods! ? ? #philipsparks #philipsparksxgeekigirl #bespoke #canadianfashion #madeincanada #madeintoronto

I have two major fashion joys from 2016. The first one is my bespoke winter coat from Philip Sparks. The bespoke experience is out of this world and I’m now forever spoiled. Philip and I brainstormed the whole jacket together. It started when he found the vintage fabric when he was antique shopping. I fell in the love with the fabric and the plan to make something out of it came naturally. I love coats, it’s one of my now controlled fashion obsessions. Working with Philip on the coat of my dreams was magical. There were so many options but Philip’s knowledge of tailoring and my style made the process much easier. I spent a lot of money on this coat. The bespoke experience isn’t cheap but this is coat brings me such joy. How many people can say they have vintage crystal buttons from Czechoslovakia on their black, boring parkas? My coat brightens up shitty days and turns heads. I feel like a million bucks in my Philip Sparks coat. My coat is the only one on the planet and that is worth everything.

Back in Black for today's practice at @UnionYogaStudio. Only the crazy ones want to do hot yoga on a 30 degree day ?. Lots of new poses to stew on after this weekend.

In April I took up Yoga. I wasn’t looking to have a casual relationship with Yoga, I wanted to go all in. It was the first time several years that I looked to take up an athletic activity seriously. I fell in love with Yoga and my studio Union Yoga. I loved the jounrey this practice was taking me. Things were going great until I got De Quervain’s Tenosynovitis in August and it has sidelined my pratice. I’m at a point in my physiotherapy regime where I can start again but it’s defintely back to the drawing board with yoga. I look forward to the challenge and can’t wait to get back on the mat.

Okay. The best #TIFF16 moment of my life happened. Michael Fassbender!!! This beats doing a shot with Mickey Rourke by infinity. Can my smile be any wider as I put my hand on his waist!! ?? Swooning!???????? @styleblogca, thank you for breaking me out of my too cool for celebs attitude. This was a great moment. #regram @m0851official – #m0851xTIFF is off to a grand start. I met and swooned over Michael Fassbender! Head on over to Facebook to read all about the TIFF Soirée, m0851's involvement and what I had to do to get this snap! No children or adults where harmed ? – Anita ? Nick Lee #TIFF16 #m0851 #TIFF #TIFFSoiree – #regrann

I met Michael Fassbender at TIFF. The meeting was a product of luck, timing and some good old fashion stalking. Yes, he’s extermely, extermely attractive. I’m not one to be star struck but man, he’s got it.

I'm finally here! Had to bust out the Mercy Jumpsuit to ring in this special occasion. #ootd #torontofashion #canadianfashion

So, I mentioned how I was hating my job. I was pretty miserable as I felt my career and options were about to pass me by. After I reached 10 years and recieved a performance reward I felt my time at the bank and in QA was done. Things were feeling really bleak to me when the opporunity at Shopify came up. This was dream job stuff and I grabbed it with everything I had. In November, I left my job of a decade and made the massive career shift to Shopify. It was scary but I haven’t looked back since and I have no regrets. I feel really happy to be part of a great company.

The Office of Angela Scott Shoes

My second fashion joy this year was when I opened the box to the Mr. Misfitz Wedge Derby shoes I ordered from The Office of Angela Scott. I finally pulled the plug during a 50% sale after years of wishful thinking. They are more glorious in person and I can’t even believe it. Don’t be suprised if I don’t wear any other shoes in 2017.

Moving this @officeofangelascott unboxing out of stories because well, this was epic! #myscotts