I love this Grace Jones print tshirt by Millionhands. It’s an i want for obvious reasons, I don’t think I need to state the obvious. 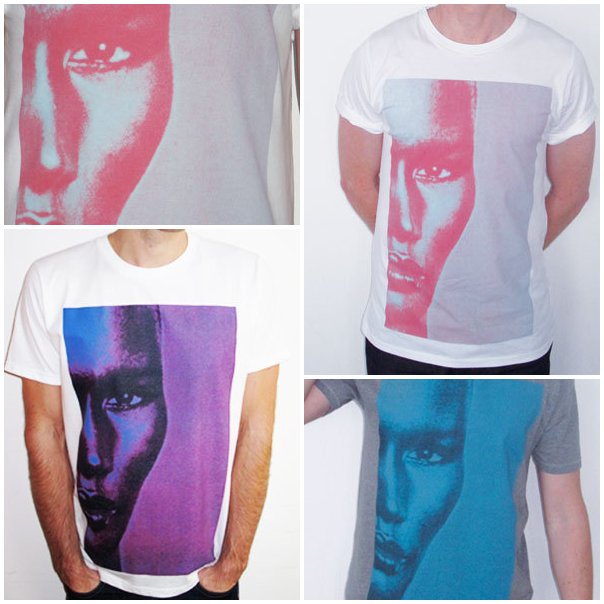 You can purchase the shirt online at millionhands.net.

I would love to be in London to see these portraits of Grace Jones.

Light, sound and Grace Jones: three unremitting forces of nature. Chris Levine, the latest in a line of artists to work with Jones (Andy Warhol and Keith Haring came before him), has brought the elements together in his 3D portrait series Stillness at the Speed of Light. “How was I going to make any evolutionary step forward in a line of some of the extraordinary iconic images of herâ€”I did my best,â€ Levine confesses. After a two-decade, self-imposed exile from the recording studio, Grace Jonesâ€”disco diva, Ã¼ber-model, Bond girl, gay icon and stuff of Studio 54 legendâ€”made a whirlwind return with the tour for her 2008 album, Hurricane. Levine, a ground-breaking light artist whose visceral work with laser beams has led to collaborations with Mario Testino and Hussein Chalayan was commissioned to work on the lighting following an introduction to Jones from master milliner, Philip Treacy. And it was a Swarovski crystal encrusted bowler hat by Treacy (one of his typically exotic, gravity-defying creations for Jones&apos;s tour) that proved the showstopper, reflecting shards of light over the audience as the high-beam laser hit it. “Laser and crystal is an alchemy I’ve experimented with for years, so when I saw the hat for the first time it was obvious what I was going to do with it,â€ Levine says. Jones then invited Levine to illuminate her portrait and to direct the upcoming music video for her single “Love You to Life,” which is a first for the artist. “It’s pretty raw and elementalâ€”just the primal essence of Grace and light,â€ Levine says. Stillness at the Speed of Light is on show at the Vinyl Factory Gallery, in Soho, London through May 15th.(NOWNESS)

Check out the rest of the slideshow on NOWNESS. Dazed Digital also has some different photos too. 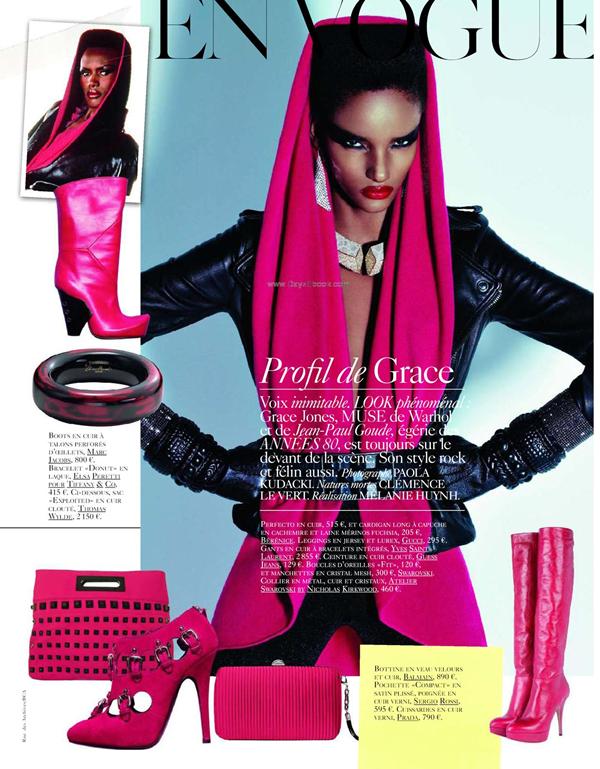 Dying over this Rose Cordero as Grace spread in theÂ  December/January 2009 of Vogue Paris. 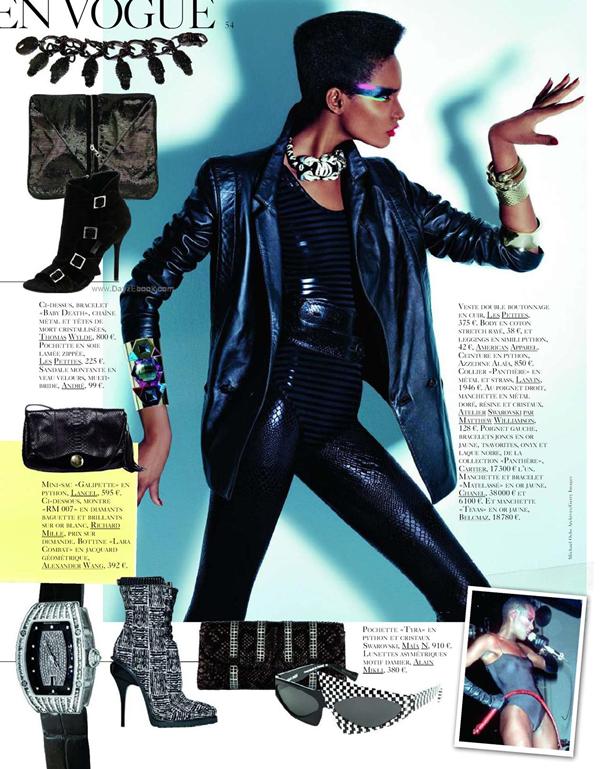 If I only had the patience to grow a fade.Â  It would be nice to recreate of these looks. 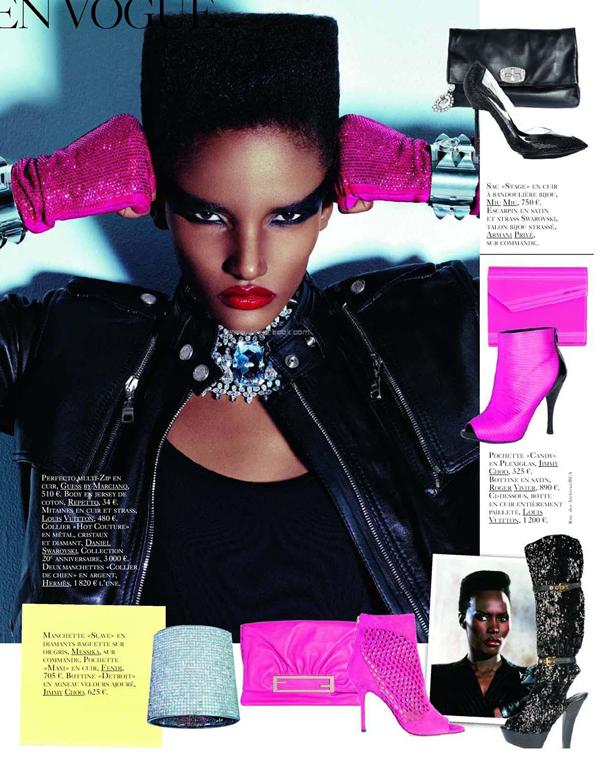 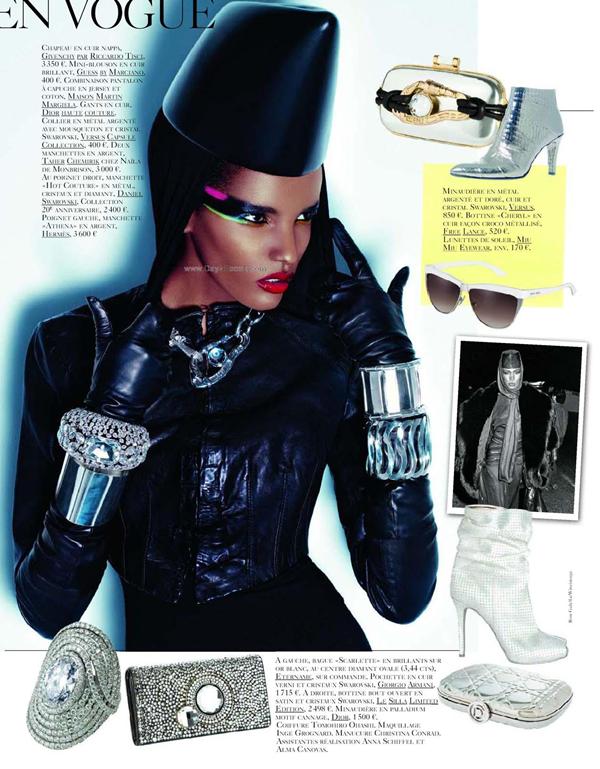 Photographer is Paola Kudacki and the Stylist is Melanie Huynh.

I love this photo of Grace Jones taken by Andy Warhol. If I had some purple fur I would totally do this version of Grace for Halloween.

You might remember my outfit last halloween for Fashion sCares.

I attended Fashion sCares. It was a blast getting dressed up and everything. I chronicled my adventure at blogTO.com. You can find the direct link here, Fashion sCares: The Costume Report.

I was the one and only Grace Jones and here was my inspiration and the execution. 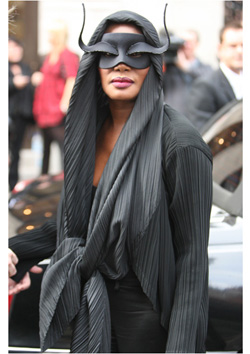 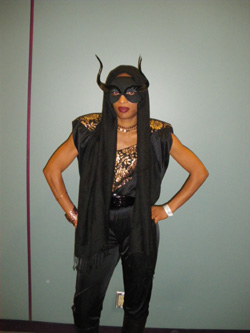 I didn’t have the jacket, which looks like Issey Miyake so I decided to forget that and do the tried and true jumpsuit. I think I’m a fan of jumpsuits now, they are a lot of fun. Until you have to go to the bathroom. I paired the jumpsuit with a scarf to emulate the look of the jacket. Danielle from Final Fashion totally helped me out with the mask. If it wasn’t for her I wouldn’t have been able to pull this look off. My next thanks is to Gail McInnes who did my makeup and completed the look. Here are my photos from the night. After looking at them again, I realize that I did a song and dance for Rex Harrington that night. (Read the blogTO post, you’ll know what I’m talking about)

Edit: Changed to link because of the damn autoplay