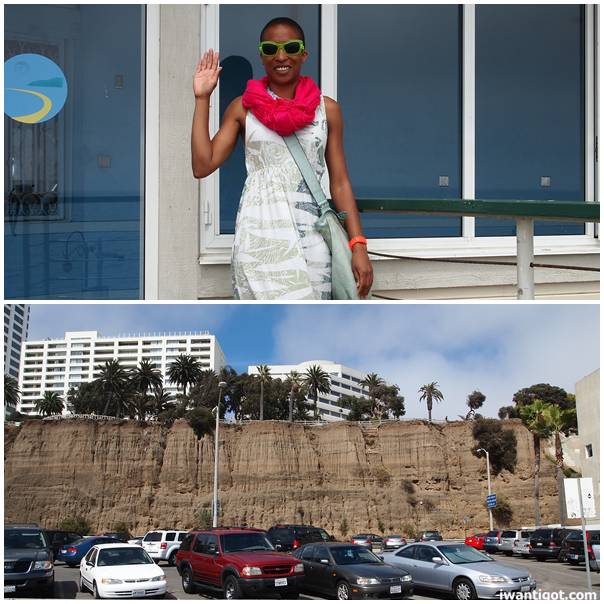 When I got up Monday morning I appreciated the SoCal sun. It doesn’t usually come out till after noon so you can sleep in and not feel guilty about missing the day. The weather by the ocean was overcast with clear breaks. When it’s sunny, it’s fantastic and you fall in love. Hell, when it’s overcast you fall in love; it doesn’t rain. I decided to check out the shopping at the 3rd Street Promenade. It was very close to the ocean. I first stopped at the Le Pain Quotidien and had Organic Red Quinoa salad with arugula, chickpeas and artichoke. Paul and Lauren’s original choice for breakfast/lunch was closed. This lunch put me on a quinoa kick and I’m making salad often at home using both regular and red quinoa.

3rd Street Promenade is pretty much all chain stores. That is something I noticed a lot of in my travels. I didn’t make a list of cool shops to visit before I left and I regret that. I really want to see what independent clothing retailers are doing. I went into J.Crew to see what the fuss was about. It just reminded me of Banana Republic. I’m not getting the hype but think the jewellery is interesting. 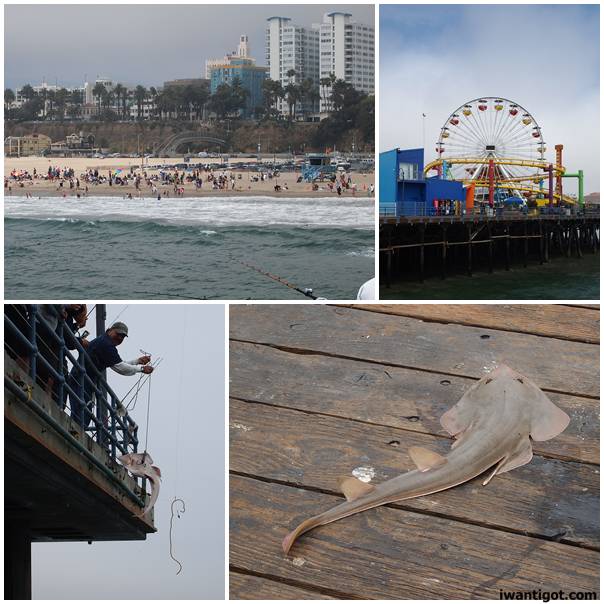 I finally made my way to the pier. It was overcast at first but then the sun came out and it was glorious. I couldn’t have asked for a better final day. I hung out on the pier and watched the people fishing. I managed to snap a man pulling up a skate he caught. I didn’t get a snap of the solitary sea-lion that bobbed his way under the pier and out the other side.Â  It’s very touristy but the crowd size is manageable during the week.Â  You can get your picture taken with cheap cutouts of celebrities or your name written on rice.Â  There were all sorts of entertainers from musicians to guys in suits. The pier musicians filled the air with their music which was creepy and beautiful at the same time. Hopefully, this video I took can convey that. 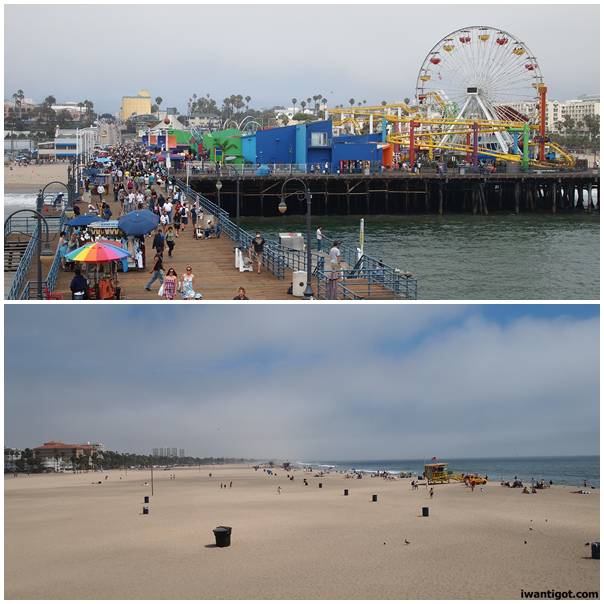 The most curious thing for me was watching Batman, Catwoman and The Joker from the pier.Â  It was a trio of three people in very good suits standing around and interacting with people.Â  I expected their to be money involved but they happily posed for photos without requiring payment.Â  This was bizarre to me, who the hell spends their day in costume at the beach.Â  Welcome to LA, this is what goes down. I spent a lot of time on Santa Monica pier on Monday. It’s so weird seeing it get destroyed in movies now. I get the same feeling with when I see that Randy’s Donuts place just outside LAX too. 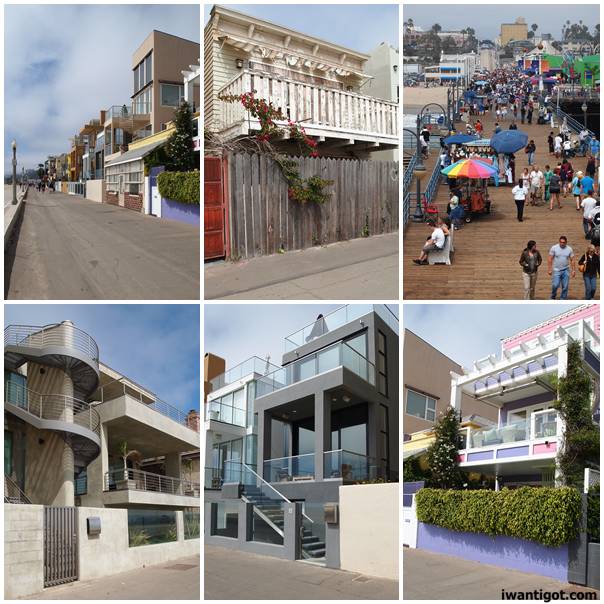 I walked north along the beach to check out the oceanside property. Wow, there are some great homes along the shore. They all had balconies and enclosed backyards facing the ocean. The only problem is that they are right up against the bike paths which are high traffic areas. I’m curious how loud it can get at night but it seems the cops patrol the trails frequently on ATVs. I grabbed a seat and finished reading my book. Heaven is a book and the beach. I really could get used to this lifestyle.

I was very anti-LA before my trip. I never wanted to visit. Paul, my friend in Santa Monica, uses to live in San Fran and I wanted to go there. I was a bit gutted when he told me he moved to LA. This trip has turned me into a LA (well,Santa Monica really) convert. This trip prompted me to learn more about just what parts of southern California make up LA country and city. Santa Monica is its own city but it’s surrounded by the city LA, that had confused me.Â  It’s all LA county which adds to more confusion.

LA trends I noticed: the covered sandal gets way more attention here than in Toronto. I was indifference to these ugly sandals in Toronto to hating them by the end of the trip. Every female has long hair. I guess it’s the Californian girl look. My short hair got looks and the occasional rude comment. SoCal has a look that I don’t fit into. I was always wondering if it was the hair or the neon green Prada sunglasses people where staring at. Anyways, being ignored by men in California is fine with me as I’m ignored in Toronto and I’d rather have LA weather and ocean. I’d totally revert back to my old sporty self and I could easily assimilated into the West Coast lifestyle. My last dinner was at Sushi Roku. I was told that LA has good sushi but Paul says San Fran is better.

I took the red-eye home and the flight was uneventful (thank god). Still hate the headrest on the seats and didn’t get a very good sleep. I was very thankful I took Tuesday off from work so I didn’t have to walk into the office from the airport suitcase in hand. I love LA and plan to return again soon.