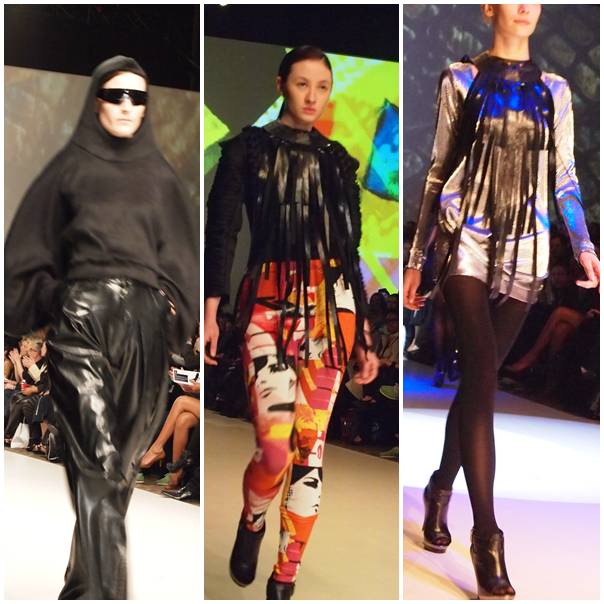 You can always expect a specific point of view from Evan Biddell. The Fall Winter 2010 collection continued with Evan’s obsession with the cocoon shape and a new fabric, cork. It was the most interesting items in the collection. He transformed cork into shorts, skirts and jackets. One jacket in particular made the wearer look like a Geiger Alien. The cork was stiff but not the point where it looked unwearable. It was more appealing to me than the PVC cocoon shapes that preceded the wave of cork pieces.

Understanding that head on images would not display any volume, Evan had the models stand at the end of the runway and face sideways to the photographer’s pit.Â  Fall Winter 2010 wasn’t as cohesive as what I saw with Spring 2010 at OZ Studios. The 80s prints, pvc, fringe, ruffles, animal print and cork left me wondering what direction Evan was going. It was a battle between sleek bodycon and volume away from the body. The short video that preceded the runway show was random and I don’t see its relation to the collection. Maybe there isn’t one.

It was a great show and I enjoyed myself. The sci-fi references alone had me on board. I love Evan’s inventive nature. I had a preview of the cork shorts during my visit to the OZ Studios and I thought they were great.Â  I didn’t expect him to make so many different cork looks, it was pretty amazing. The prints were very 80s but I loved their bright, bold nature. Evan Biddell occupies a small niche in fashion, he’s not corporate or looking for mass appeal. It’s refreshing to see his point of view. Too bad the FDCC didn’t allow him to show at his newly opened OZ Studios. I would have loved to see what he came up with.

Pictures are getting better but I still have a lot of work to do as a newbie Olympus E-PL1 user. Here are some of my favourite looks.